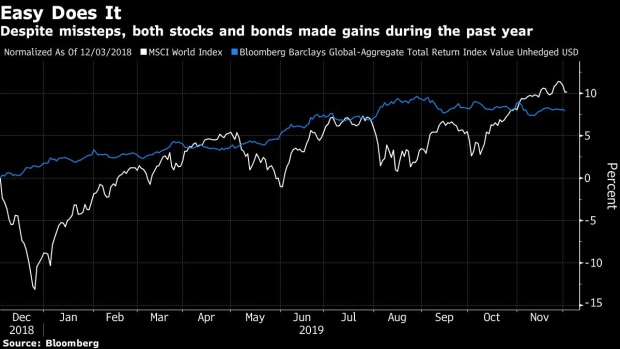 (Bloomberg) -- The next push for the global economy may come from governments instead of central banks -- and the outcome for markets could be messy.

Synchronized monetary easing helped keep global stocks and bonds afloat amid a succession of bruising trade disputes and geopolitical flare-ups in 2019. But the effect may tail off soon, and an array of government spending measures designed to fuel growth may produce much more divergent results.

The outlook for markets in the next year varies “drastically” from country to country in line with the ability of each to deploy fiscal stimulus, said Hannah Anderson, global market strategist at JPMorgan Asset Management. The result will be “incredibly wide dispersion” for stock markets “and quite a bit of volatility therein,” she said.

Even if a consensus is building that governments will have to enact more expansionary fiscal measures, not all may be able to do so, said Sue Trinh, global macro strategist at Manulife Investment Management in Hong Kong. On metrics such as net borrowing as a percentage of gross domestic product and gross government debt levels, Japan, the U.S. and some European countries have limited scope to act, she added.

Inflation may also accelerate if governments start to stimulate economies at full employment while interest rates are already low, putting pressure on bonds, according to John Woods, chief investment officer for Asia Pacific at Credit Suisse Group AG. He expects equities to come out ahead in 2020, with losses anticipated for high quality fixed income.

In developed markets, the U.K. is most likely to act as it attempts to deal with the consequences of Brexit, which could lead to gains for the pound, according to Standard Chartered PLC. Among emerging markets, the bank expects the most likely beneficiary to be the Russian ruble.

“Fiscal expansion is growth-positive for the first year or two and is therefore usually FX-positive -- government spending generates growth and long-dated yields move higher,” analysts including Steve Englander, head of global G-10 FX research, wrote in a research report dated Dec. 2. For some emerging-market currencies from countries where interest rates are higher, the reverse is true -- and weakness in the currency could follow fiscal stimulus, the note added.

Among the countries least likely to enact stimulus next year is the U.S., because of the difficulty of reaching any consensus in Congress, JPMorgan’s Anderson said. What could change that is an economic crisis, she added. Needless to say, that’s not a great proposition for stocks.

“We’ve seen a lot of central banks hoping to see fiscal policy show up in their stocking this Christmas. They’re likely to be disappointed,” she said.

To contact the editors responsible for this story: Christopher Anstey at canstey@bloomberg.net, Joanna Ossinger, Brendan Walsh