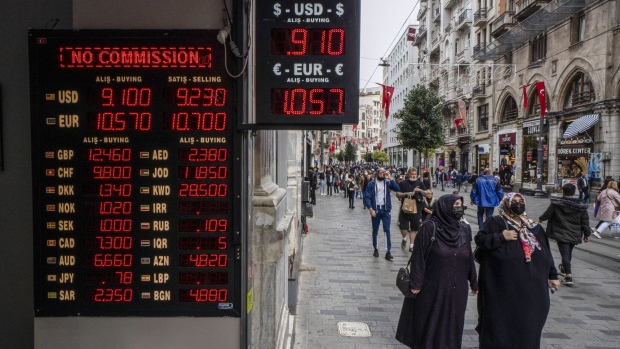 (Bloomberg) -- Fitch Ratings cut the outlook on Turkey’s sovereign credit rating to negative, citing a deterioration in domestic confidence as a result of monetary easing the credit assessor described as “premature.”

The outlook change comes a day after President Recep Tayyip Erdogan abruptly replaced his finance minister amid deepening rifts in the administration over aggressive interest-rate cuts that have undermined the currency. The lira has weakened about 30% over the past month.

The deterioration is reflected in the weakening of the currency, Fitch analyst Erich Arispe Morales wrote in the report. That creates risks to macroeconomic and financial stability that could rekindle financing pressures, he wrote. The agency rates Turkey as BB-, three notches below investment grade, in line with Brazil and South Africa.

“The central bank’s premature monetary policy easing cycle and the prospect of further rate cuts or additional economic stimulus ahead of the 2023 presidential election have led to a deterioration in domestic confidence, reflected in a sharp depreciation of the Turkish lira, including unprecedented intra-day volatility, and rising inflation,” according to the report.

Recent central bank rate cuts the president had encouraged -- at a time when inflation is already running close to 20% -- have punished Turkish assets as investors cast doubt on the unconventional approach to running the economy.