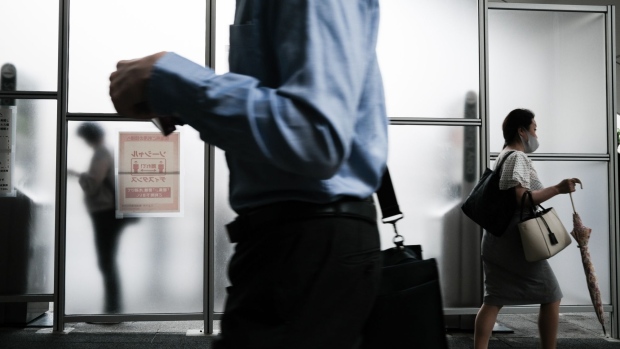 Morning commuters walk past a social distancing sign outside Hachioji Station in Hachioji City, Tokyo, Japan on Wednesday, July 22, 2020. Japan’s push to help revive its virus-ravaged economy with a “Go To” travel campaign has dealt a double blow to Tokyo, whose residents were cut off from promised travel subsidies and businesses are set to miss out on tourists. Photographer: Soichiro Koriyama/Bloomberg , Bloomberg

(Bloomberg) -- Fitch Ratings revised down the outlook on Japan’s sovereign rating to negative from stable while keeping the rating unchanged, following a similar move last month by S&P Global Ratings.

“The coronavirus pandemic has caused a sharp economic contraction in Japan, despite the country’s early success in containing the virus,” Fitch said in a statement Wednesday. “Sharply wider fiscal deficits in 2020 and 2021, as we project, will add significantly to Japan’s public debt, which even before the pandemic was the highest among Fitch-rated sovereigns as a share of GDP.”

The credit ratings firm affirmed Japan’s rating of A for long-term debt. But the company sounded alarms over recently rising Covid-19 case numbers in Japan, and the possibility of further containment measures and risks to the economic outlook.

Japan has pushed up its tally of economic measures to combat the virus impact to around $2 trillion, roughly 40% of the size of its economy.

Fitch projects Japan’s economy to contract by 5% for the full year in 2020, before rebounding to 3.2% growth next year. But the firm didn’t expect GDP to return to pre-pandemic levels until the fourth quarter of 2021.

The ratings report had little impact on the yen, which was trading at around 105.10 per dollar Wednesday morning in Tokyo.