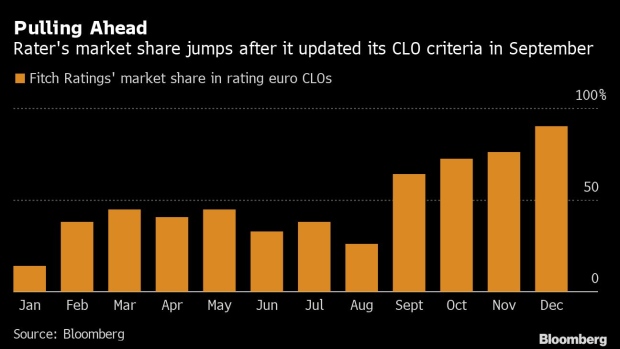 (Bloomberg) -- Changes to the way Fitch Ratings assesses collateralized loan obligations have allowed managers to add more leverage to their deals, helping the agency claw back business lost to similar moves by its rivals in Europe.

Fitch’s alterations have allowed managers more flexibility, including the ability to add more debt to deal structures, according to three people familiar with the matter, asking not to be named due to the sensitivity of the topic. That’s concerning, according to one CLO investor, because it may leave the asset class vulnerable over time if rating agencies continue to make further concessions to grab more business.

Representatives for Fitch declined to comment when contacted by Bloomberg.

Fitch more than doubled its market share for rating CLOs since September compared to the average for the previous eight months of 2021, according to data compiled by Bloomberg. The improvement coincided with the agency’s announcement that month that it was updating its criteria and expected the change to result in a “modestly positive” impact on ratings.

CLOs have attracted investors’ attention as they pay floating interest rates that become appealing when global central banks prepare to hike borrowing costs. Adding more debt to a deal can enlarge the AAA, or top-rated, tranche of the CLO. That in turn shrinks the equity portion of the package, increasing the overall level of leverage -- and risk.

One key measure, known as par subordination, has come down to pre-Covid levels of about 38%-39%, from over 40% for top-rated debt during the pandemic, according to Bank of America and Morgan Stanley research. It dropped as low as 37% in some deals in 2021.

A lower reading means there’s a smaller cushion for the amount of losses the portfolio can take before AAA debt is affected. But it can also lower the cost of funding for a CLO, which can translate to higher returns for equity investors.

“Equity investors are always going to push for the boundaries and always get as much leverage and flexibility as they can get,” said Aza Teeuwen, portfolio manager at TwentyFour Asset Management LLP. “If investors are worried where AAA credit enhancement is going, it’s easy to step away from the deal. There’s plenty of them.”

To be sure, some bankers play down the significance of the criteria in their pick of ratings agency.

“Methodology will have an impact on our decision a bit but not completely,” said Peter Cui, head of structured credit syndicate at Natixis in London. “Investors have a lot of input in which rating agencies we use. Sometimes we will add specific agencies on specific tranches to suit investor requirements.”

Another reason for the relaxed attitude to leverage is that AAA debt has never defaulted, not even during the financial crisis.

Fitch is catching up with its peers, which both made changes to their methodology in recent years. European CLOs need ratings from at least two providers.