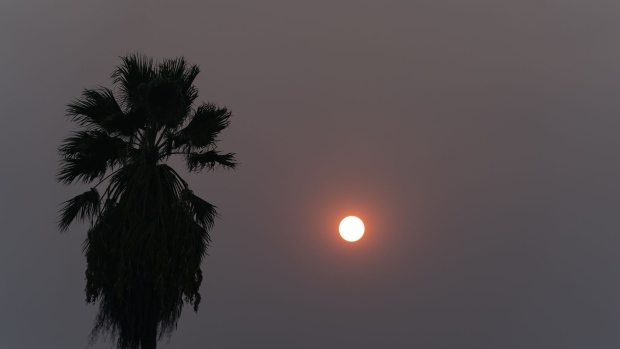 The sun is obscured by smoke from wildfires in Fresno, California, U.S., on Thursday, Aug. 20, 2020. More than 360 blazes are burning in California, forcing mass evacuations in the northern part of the state and creating an air quality emergency. Photographer: Alex Edelman/Bloomberg , Bloomberg

Emerging markets have been the missing part of climate-finance discussions. This year they’re supposed to be “the centerpiece.”Wednesday is “finance” day at COP27 in Sharm el-Sheikh, Egypt, when the conversation shifts to the financial toll of a warming world. This year, there is a particular focus on how to get as many countries and companies as possible to pay their fair share to slow the pace of climate change.

That’s quite a contrast from last year, when the main topic of conversation was how big banks and asset managers were supposedly planning to cut emissions while using their financial leverage to push corporations into the green transition.For John Green, chief commercial officer at investment manager Ninety One, shifting the emphasis to emerging markets is critical.

“It’s one of the big pieces of the puzzle—in effect it’s the centerpiece—that’s sort of not being considered,” Green said in an interview at COP27’s South Africa pavilion. “And, you’re not going to finish the puzzle without solving that problem.”BlackRock Inc., the world’s largest asset manager, said last year that “emerging markets are essential to the transition, but they are starved of capital to fund it.” Developing economies face a “massive climate financing shortfall” that needs to be fixed urgently, the firm said.There are many options being debated and developed at COP27. They range from $100 billion of climate-focused commitments to so-called Just Energy Transition Partnerships to using “blended finance” or tapping the carbon markets. But part of the reason why the private sector hasn’t piled into emerging markets is that the targets companies set to clean carbon from their portfolios encourage them to avoid developing economies, Green said.Another reason is emerging markets have been “sidelined” in the creation of sustainability regulations and frameworks, most notably the European Union taxonomy, said Caroline Haas, who leads NatWest Group Plc’s climate ESG capital markets team.

Even so, Michael Marks, head of investment stewardship and responsible investor integration at Legal & General Investment Management, said there’s no reason why a net-zero agenda and the focus on emerging economies need to be “mutually exclusive.”