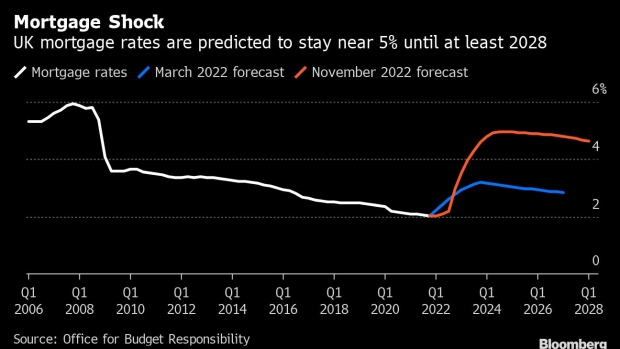 (Bloomberg) -- Britain’s housing market is headed for its worst slump since the global financial crisis more than a decade ago after a surge in mortgage interest rates added to the woes of buyers struggling with a cost-of-living crisis.

Two of the nation’s biggest mortgage lenders, Nationwide Building Society and Halifax, say that prices fell in each of the past three months with November seeing the biggest decline since the credit crunch of 2008 and 2009.

The concern is that latest readings are the start of a protracted downturn that could rival the property market recession that started in late 1989. That episode saw properties lose a fifth of their value over three years and left as many as a million people with homes worth less than the mortgages used to buy them.

Nationwide’s Chief Financial Officer Chris Rhodes last month said his “worst-case” scenario included a 30% drop in prices, but that a 8% to 10% decline is more likely. Bloomberg Economics expects a drop of slightly less than 10% next year, estimating that values are currently 20% higher than can be justified by fundamentals.

The big driver is surging interest rates, which have driven up the cost of mortgages to the highest since the property market was last in recession in 2008 and 2009. The Bank of England lifted its benchmark lending rate eight times in the past year from near zero to 3%, and investors anticipate more moves in the months ahead.

That’s pushed mortgage rates on two-year fixed-rate deals above 6% in the past few months, meaning anyone who remortgages now may see their payments double, according to data from Moneyfacts Group Plc. The Office for Budget Responsibility anticipates the average mortgage cost may remain elevated until the end of the decade.

The surprise so far has been how long property prices held up. Nationwide recorded double-digit growth from a year ago through August. A series of tax breaks, cheap money and the ambition of consumers to move out of city centers and into places with space for a home office kept prices soaring through the pandemic.

Now, rising rates are choking off the flow of new buyers. And those who need to remortgage are about to confront a big surge in monthly payments. Bank of England data indicates about almost a third of those on deals that fix their payments will have to refinance in the next two years.

Those costs are adding to the strain on household budgets, which are already struggling with the highest inflation in 41 years. Consumer prices rose 11.1% in October, driven by a jump in the cost of food and energy. The British Retail Consortium says shoppers are paying more to buy less and are diverting their spending toward essentials. That may leave less money to spend on housing.

--With assistance from Damian Shepherd and Liza Tetley.