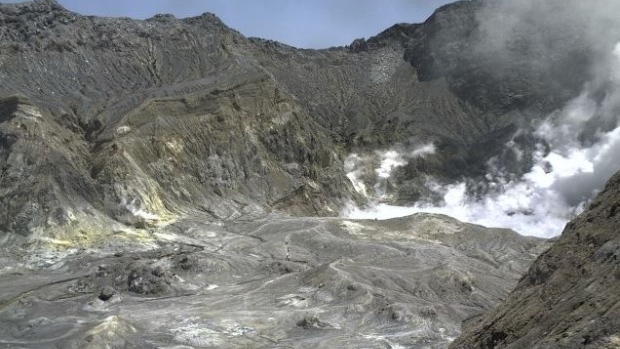 Five people have been confirmed dead following a volcanic eruption on New Zealand’s White Island, while dozens more were injured after a plume of white smoke and ash burst thousands of meters into the air.

About 50 people, many of them tourists, were on or around White Island when it erupted, police said. The island is about 48 kilometers (30 miles) off the east coast of New Zealand’s North Island.

Deputy Commissioner John Tims said in a televised media briefing Monday five people had been confirmed dead. Police, rescue services and New Zealand Defence Force aircraft have undertaken a number of aerial reconnaissance flights over the island since the eruption and “no signs of life have been seen at any point,” according to a statement from police.

Police were working to confirm the exact number of those who’d died, further to the five already confirmed. “As part of the recovery a NZDF ship will approach the perimeter of the island at first light to deploy drones and observational equipment to further assess the environment,” the statement read.

Ambulance service St John said it believes up to 20 people on the island required medical treatment but could not confirm the nature or extent of their injuries.

Many of the people visiting White Island are understood to be from the cruise ship Ovation of the Seas, which was berthed at the Port of Tauranga Monday, the New Zealand Herald reported. Port company chief executive Mark Cairns told the newspaper he understands the majority of those injured in the eruption are from the ship.

UPDATE: At least 5 people have died after the White Island, New Zealand volcanic eruption. @nzpolice say the number of missing people is in double digits.

Prime Minister Jacinda Ardern said the situation is still unfolding and she will travel to the area this evening.

The eruption created an ash plume some 3.6 kilometers high, government agency GeoNet said. The volcanic alert level was raised from two to four, one notch below its top reading, before being reduced to three, GeoNet said.

“We have seen a steady decline in activity since the eruption,” Geoff Kilgour, duty volcanologist at GeoNet, said in a statement. “There remains significant uncertainty as to future changes but currently, there are no signs of escalation.”

New Zealand sits on the Pacific Ring of Fire, a belt of volcanic and seismic activity that rings the Pacific Ocean.