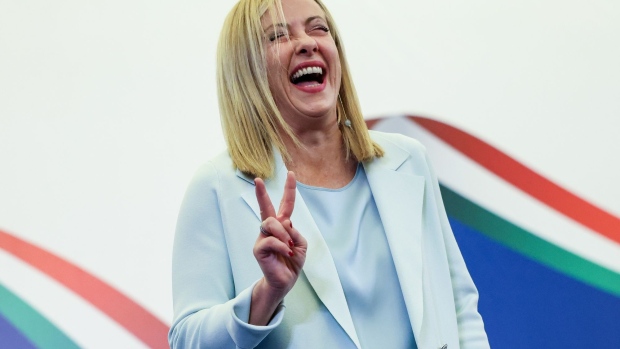 (Bloomberg) -- Italy’s Giorgia Meloni is set to become premier after her right-wing coalition won Sunday’s elections, but she will have little time to pop the prosecco.

Awaiting her are a darkening economic outlook, high debt and energy price hikes in the wake of Russia’s invasion of Ukraine. The hit to Italy’s finances and the prospect of more interest-rate hikes from the European Central Bank have pushed the yield on Italy’s 10-year bonds to more than 4.5% compared with less than 1% in December.

Here’s a rundown of the top challenges facing Meloni:

A draft budget due to be presented shortly after the elections, and to be approved by year-end, will likely be just an abridged version focusing on grim economic forecasts. That means less fiscal room for intervention to help support the economy.

Meloni has vowed to keep the public finances in check, and to help Italians weather the crisis. With growth slowing and interest rates on the rise it will be increasingly difficult for Meloni to maintain her balancing act without expanding the country’s deficit, a move that may be unwelcome to markets. Her main ally Matteo Salvini of the League wants a 30 billion-euro ($30 billion) state subsidy to cap the cost of energy for businesses in the run-up to winter.

Italy has spent 66 billion euros so far protecting its citizens from power price increases and more will be needed. Even just extending tax breaks to companies that use a lot of energy until the month of December would cost almost 5 billion euros, according to people familiar with the matter. The country faces the prospect of paying twice as much for energy imports as it did a year ago, triggering concerns about the future of thousands of small and medium-sized firms.

Meloni favors an EU-wide gas price cap. But she’s ready to restructure Italy’s energy market once in power without waiting for European peers. Decoupling the price of power from renewable sources from that of gas would cost 3 billion euros to 4 billion euros until March, she said, and won’t require adding to Italy’s large debt.

Just a few weeks after the vote, the Italian Treasury is set to plug additional 1.6 billion euros of fresh funds into nationalized Banca Monte dei Paschi di Siena SpA in a planned 2.5 billion-euro capital increase. This is the latest in a long line of attempts to revamp the ailing lender, which was first bailed out in 2009 and has burned through about 18 billion euros of taxpayer and investor cash since then.

Maurizio Leo, a top economic adviser to Meloni, called on Sept. 11 for a delay in the bank’s capital-increase, arguing that the plan should wait until a new government is in place. A few days later, he said that if the bank could raise money now, this would be welcome.

Even if the cash call succeeds, the state will still have to exit the lender after talks with UniCredit SpA collapsed last year. Matteo Salvini of the League, part of Meloni’s coalition, has said the bank can thrive on a stand-alone basis by combining with its smaller Italian peers. Meloni’s Brothers of Italy party may have a different view, like regulators.

The outgoing government of Prime Minister Mario Draghi entered exclusive talks at the end of August with a group led by the Certares investment fund, including Air France-KLM and Delta Air Lines Inc., to sell the airline born of troubled Alitalia.

Meloni opposed the plan, saying that handing ITA over to foreign funds after having spent billions on the airline was wrong. Opposition from the election’s winners could scuttle the deal since there is no set date to finish the exclusive talks. The next government could go with another investor group or even block the carrier’s privatization altogether.

Telecom Italia is currently trying to speed up a turnaround plan that will lead to ceding control of its network. In July, the company’s board told Chief Executive Officer Pietro Labriola to give up control of the grid and cut over 30 billion euros in gross debt by breaking up the phone carrier into several units and finding new partners.

Labriola’s attempt to sell off the company’s landline network to a group led by Cassa Depositi e Prestiti, KKR & CO. and Macquarie Group Ltd has been questioned by Meloni’s party. With Meloni in charge, plans could change quickly.

Meloni’s party is promoting a plan to make Telecom Italia private and sell off the phone company’s assets in a bid to cut its debt pile by more than half, people familiar with the matter have said. Meloni would encourage a takeover bid by state lender Cassa Depositi, then sell about 30 million of Telecom Italia’s mobile and landline subscribers to competitors for about 13 billion euros, according to the people.