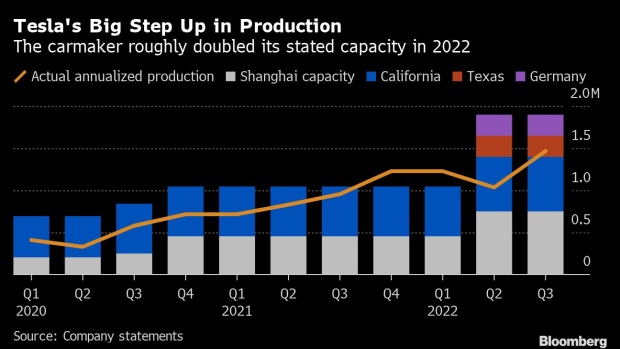 (Bloomberg) -- Tesla Inc. investors badly bruised by last year’s 65% rout are looking for clarity from Wednesday’s earnings report on demand for its electric vehicles, how recent price cuts will impact profitability and how many cars the company plans to make in 2023.

It’s been an eventful three months since Tesla last reported earnings and Elon Musk spoke with Wall Street analysts. The chief executive officer closed his $44 billion acquisition of Twitter Inc. in late October, then offloaded billions of dollars worth of Tesla stock in November and December. Early this year, Tesla reported fourth-quarter deliveries that fell well short of expectations, then slashed prices in the US and Europe.

Analysts expect adjusted earnings of $1.12 a share on revenue of $24 billion, according to estimates compiled by Bloomberg. Consensus for both profit and revenue has declined since Tesla disclosed delivery figures on Jan. 2.

Tesla shares have retraced some of last year’s losses, rising 17% this month. The earnings results may inject another dose of volatility, with options pricing suggesting the stock might fluctuate 11% in either direction after the report, which would be the biggest such move since the fourth quarter of 2021, according to Bloomberg data. The shares traded down as much as 2.6% shortly after the open Wednesday.

Here are five key items to watch when Tesla reports fourth-quarter earnings after the market close.

Tesla now has four auto plants on three continents and delivered 1.31 million cars worldwide in 2022. In its last shareholder deck, the company said its factories had the capacity to build more than 1.9 million vehicles annually.

Since the start of 2021, the company has said it expects to average 50% growth in deliveries annually over multiple years.

That outlook is now in doubt. During a Twitter Spaces conversation last month, Musk predicted a serious recession and warned consumers will cut back on big-ticket purchases. He called higher interest rates and lower demand a “double whammy,” and said Tesla faced a choice: “Do you want to grow unit volume, in which case you have to adjust prices downward? Or do you want to grow at a lower rate, or steady?”

“My bias would be to say: Let’s grow as fast as we can without putting the company at risk,” he said. In that scenario, Tesla’s CEO said profits would be “lower to negative” during the recession, on the condition that its cash position is sound. “I think that’s still the right move, long-term,” Musk said.

Tesla then slashed prices across its lineup this month. So how many cars does the company expect to deliver in 2023? Investors should soon get an idea.

Tesla has long claimed among the highest gross margins in the auto industry, and the company has said it expects software-related profit to increase over time. That may have come into play last quarter, as Musk made the highly controversial system Tesla has marketed as Full Self-Driving more widely available for paying customers.

But the price cuts Tesla enacted in China and the discounts offered in the US during the fourth quarter had to have affected margin, and reductions early this month will impact profitability going forward. Analysts are still expecting gross margin of 25% for the fourth quarter.

The angular, stainless-steel Cybertruck is the next vehicle in Tesla’s lineup, and one that consumers have shown enormous interest in. In its shareholder deck for the last quarter, the company said that it had started tooling up for the model at its newest plant in Austin, Texas.

We haven’t heard much about Cybertruck details since Musk first unveiled it in November 2019. The Tesla growth story hinges on the future — on products ranging from the Cybertruck to the Semi, and business lines including energy and insurance. Also key will be the next-generation vehicle platform that will underpin cheaper models. Details on that may have to wait until the investor day the company has scheduled for March 1.

How much money does Tesla plan to spend on ramping up and expanding existing factories, and potentially building new ones?

A year ago, Musk said that Tesla would spend 2022 looking at factory locations and possibly announce them before year-end. While the company didn’t end up following through, Bloomberg reported in recent weeks that it’s been finalizing plans for plants in Mexico and Indonesia.

On Tuesday, Tesla confirmed plans to invest $3.6 billion in Nevada to expand its facilities there to make enough batteries for 2 million cars a year, as well as Semi trucks. All these projects could mean the company ends up increasing capex from the $6 billion to $8 billion a year it’s been forecasting since July.

During Tesla’s Battery Day event in September 2020, Tesla announced it was making new, larger 4680 battery cells on a pilot line at its Kato Road facility in Fremont, California. These are among the batteries that will be churned out in Nevada.

Making automotive-grade battery cells at consistently high volume and quality is no small feat, and Tesla’s foray into battery cell production is another sign of how critical vertical integration is to its overall strategy.

Investors have repeatedly pressed Tesla executives on how many 4680 cells it’s been making on a weekly or monthly basis. Also of interest: whether the cells are now going into Texas-made Model Ys that are being delivered to customers, or if the company continues to use them largely in cars driven by employees.

--With assistance from Sean O'Kane, Craig Trudell and Sophie Caronello.

(Updates with stock move in the fourth paragraph.)