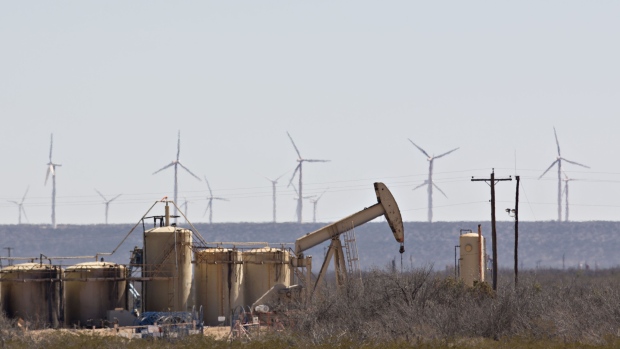 Green bond sales and loans this year are outpacing new fossil finance activity for the first time since the the Paris Agreement was set at the very end of 2015. , Bloomberg

(Bloomberg) -- Since the clinching of the Paris Agreement, the global banking sector has underwritten more than $3.6 trillion of bonds and loans for the fossil-fuel industry. No bank has done more—or taken more in fees—than JPMorgan Chase in the past five-plus years.

The same constellation of banks has originated more than $1.3 trillion of green bonds and loans to support climate-friendly projects over the same period. No bank has done less than Wells Fargo, which has arranged the lowest proportion of green financing relative to fossil fuel among the world’s largest lenders.

These are some of the key findings from a new analysis of Bloomberg's exclusive data on activity from almost 140 banks around the world. The project also finds that France's banks punch above their weight in green financing, while China harbors most of the remaining bankers raking in the profits from coal.

But the biggest surprise of all is that high finance may have just shifted into a new era. Led by underwriting from firms including JPMorgan and Citigroup, green bond sales and loans this year are outpacing new fossil finance activity for the first time since the Paris Agreement was announced at the very end of 2015.

The transformation in the capital markets—if it lasts—indicates that the world’s largest banks may finally be getting behind the movement towards a low-carbon future. It also may be a sign that financial giants are seeing an advantage to green projects from a profit-and-loss standpoint. (See the full data project.)Below are some of the highlights from Bloomberg’s data on fossil-fuel financing and green debt.

The largest bank in the U.S. is also the most entangled in the fossil-fuel industry. JPMorgan has pocketed an estimated $900 million in fees from helping arrange loans and bond sales for energy companies since the start of 2016, according to Bloomberg data. That’s 14% more than Citigroup, 40% more than Bank of America and 60% more than Wells Fargo, its closest competitors.

JPMorgan’s dominant position in this part of the investment banking business has attracted criticism from not only climate activists but also from its own shareholders. In response, the New York-based company unveiled a new round of steps last week designed to lower its exposure to corporate polluters by 2030. Among other initiatives, the giant bank pledged to reduce the carbon emissions of its lending portfolios for the oil and gas, electric power and auto manufacturing sectors.The announcement didn’t impress the Sierra Group, which said the bank should make ending the expansion of fossil fuels a precondition for financing clients involved in oil, gas and coal. That’s not happening at the moment. So far this year JPMorgan has helped arrange $1.2 billion of loans and bonds for energy companies. Since Paris, meanwhile, the bank has underwritten $256 billion.

In the fossil-fuel arena, Wells Fargo is a standout—and not in a good way.

The San Francisco-based bank ranks as the world’s second-largest arranger of bond sales and loans for fossil-fuel companies, and No. 4 by fees earned. For green bonds and loans, in contrast, Wells Fargo is the 50th biggest underwriter since the Paris climate deal, according to Bloomberg data. That disparity puts Wells Fargo in the position of the bank making the smallest effort to support the climate transition relative to its fossil finance.

The bank has earned an estimated $565 million of fees from its financing with oil, gas and coal-linked companies, and just $37 million or so from arranging green debt deals, Bloomberg data show.

Wells Fargo’s leading position in energy lending dates back to 2012 when it bought the North American part of BNP Paribas that focuses on this business, said Gerard Cassidy, an analyst at RBC Capital Markets. Until then, Wells Fargo was known for its commercial lending to corporate customers and also for its large U.S. residential mortgage operation.

For most of the past five years, the company has been distracted by a series of consumer-banking scandals, Cassidy said, which helps explain why it has been slow to build up its green-related operations. That may soon change based on the bank’s recent statements.

Wells Fargo said it’s committed to sustainable finance and has helped fund 12% of all wind and solar energy capacity in the U.S. over the past 10 years. In March, the company announced plans to deploy $500 billion to sustainable businesses and projects by 2030.

The Greenest Bankers Are in France

French banks are known for dominating their home market, but they’re considered also-rans on the global stage when compared with U.S. lenders. That’s not the case in the world of green banking.Credit Agricole is the leading underwriter of green bonds, three places ahead of the much larger JPMorgan since the end of 2015. Two other Paris-based banks, BNP Paribas and Societe Generale, rank in the top 10 in Bloomberg’s league table.

French banks were early in identifying green lending as a way to differentiate themselves from their rivals, said Maia Godemer, a London-based researcher at BloombergNEF, a clean-energy think tank. Green debt offerings have been steadily increasing for the past five years, and 2021 is shaping up to be the biggest yet. Issuers have sold more than $187 billion of green bonds so far in 2021, almost triple the pace from the year-earlier period.

The underwriting market for renewable-energy companies is minuscule when compared with the funds that fossil-fuel companies are raking in.Since the start of 2016, renewable-energy producers have raised less than $160 billion in the debt markets, compared with the $3.6 trillion for non-renewable energy producers, according to Bloomberg data. This year, when one would expect the spread to be narrowing, green energy providers have received less than $10 billion from bond sales and loans, while fossil-fuel companies got almost $190 billion.The leading lenders to renewable-energy companies since 2016 include Japan’s Mitsubishi UFJ Financial Group, BNP Paribas and Australia & New Zealand Banking Group. Bank of America was the top U.S. bank, placing 11th in the league table.

The numbers clearly show it isn’t easy being a coal banker these days.

So far in 2021, only $6.6 billion of bonds and loans have been extended to coal companies, down from $19.3 billion in the same period a year ago. The data support the growing unease among lenders to work with producers of a fossil fuel that emits the most carbon dioxide for every unit of usable energy it generates.

One of the few places where coal bankers are generating fees is China. Of the 10 largest coal bond underwriters since the start of 2016, nine are based in China. This group is led by Beijing-based Bank of China and Industrial Bank. The sole non-Chinese lender on the list is Deutsche Bank.