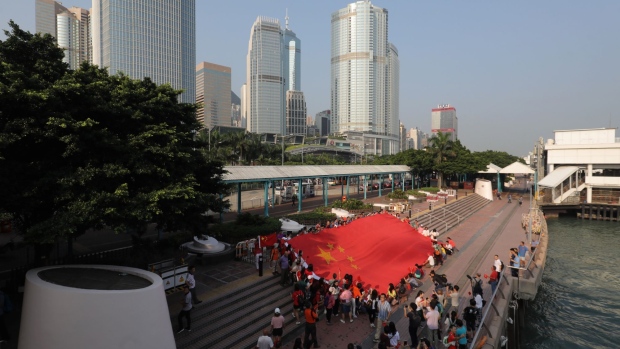 Pro-government supporters display a Chinese flag during a flash mob in the Central district of Hong Kong, China, on Tuesday, Oct. 1, 2019. Chinese President Xi Jinping stressed national unity and said relations between Hong Kong and the mainland would improve, as the city braced for a wave of protests to coincide with the 70th anniversary of Communist rule. , Bloomberg

China avoids trade issues in its first retaliation against the U.S. over its support of Hong Kong, the World Trade Organization faces a functionality crisis, and Republican lawmakers are claiming that there are no impeachable offenses — just ‘disagreements’ — in the investigation of Donald Trump. Here are some of the things people in markets are talking about today.

Measures on trade were a glaringly obvious omission in China’s first retaliatory actions against the U.S. over a law supporting Hong Kong’s protesters. Instead, the mainland vowed to sanction some rights organizations and halt American naval visits to the city. Chinese Foreign Ministry spokeswoman Hua Chunying told a news briefing Monday that U.S. groups targeted for sanctions included the National Endowment for Democracy, Human Rights Watch and Freedom House. Hua said that China would also suspend further Hong Kong port visits by U.S. Navy ships over the legislation, which Trump signed into law Wednesday. Hua didn’t provide details on how China would sanction the rights groups, which are already restricted from operating on the mainland. Similarly, China had already refused visits by a pair of American warships in August. To Patrick Poon, a Hong Kong-based China researcher at London-based Amnesty International, the actions look like “an empty threat.” China’s yuan, often a gauge of trade-war stress, saw a modest decline following the foreign ministry’s statement.

China’s restraint on the trade front notwithstanding, the S&P 500 Index fell the most in almost eight weeks on Monday partly thanks to trade tensions on other fronts. President Donald Trump reinstated U.S. levies on steel and aluminum from Argentina and Brazil, a move that served as a reminder to investors that the deadline for the next round of American tariffs on China — Dec. 15 — is quickly looming. Asian stocks looked set to fall Tuesday, with equities also hurt by disappointing U.S. factory data Monday. Futures in Japan, Australia and Hong Kong all pointed lower, and the yen is stronger. The risk-off mood spread to Europe, where shares had the biggest slump in two months. The dollar slid against most major peers, and ten-year treasury yields closed higher but off their intraday peak. A gauge of retailers in the S&P 500 dropped on Monday, joining broader market losses — even though Black Friday hit a record $7.4 billion in U.S. online sales. Elsewhere, oil rose the most in more than a week as traders sifted for fresh signals on whether OPEC and allied crude producers will tighten supplies when they meet later this week.

The World Trade Organization’s appeals panel will cease to function starting Dec. 11 when one of its three remaining members plans to step down, according to people familiar with the situation. Thomas Graham, the chairman of the WTO’s powerful appellate body, told officials this month that he won’t agree to consider disputes after Dec. 11 when his term ends, said the people. This will effectively paralyze the most important function of the Geneva-based trade organization — which upholds, modifies or reverses WTO rulings — at a time when multilateral relationships have come under assault from protectionist currents. The crisis at the WTO was created by a U.S. block on new appointments to the appellate body, which the Trump administration says has overstepped its mandate and infringes on American sovereignty. On Dec. 11, when Graham and one of his colleagues’ terms expire, there won’t be enough members to decide on new cases. Graham’s resignation also means that pending appeals would be thrown into legal limbo.

A 110-page report from GOP lawmakers concludes the Democratic-led House investigation of Donald Trump  failed to establish any impeachable offenses. Instead, it paints a picture of “unelected bureaucrats” disagreeing with the president’s style, world view and foreign policy decisions. Republicans on the House Intelligence Committee released their conclusions Monday as the panel’s Democrats are letting members review the majority report, expected to be released this week before the Judiciary Committee’s first public hearing on Wednesday. The GOP findings will be sent along with the Democratic report to the Committee, which will begin hearings this week to determine whether to bring articles of impeachment against Trump. The Republican document asserts the Democrats’ impeachment case rests “almost entirely on hearsay, presumption and emotion” to arrive at a “predetermined outcome.” Meanwhile, the U.S is “likely” to bring additional charges in a case against Lev Parnas and Igor Fruman, associates of Rudy Giuliani who are accused of skirting campaign contribution limits as part of a plot to oust the American ambassador to Ukraine, a prosecutor said.

Terrified that shrinking forecasts for economic growth are sounding the death knell for equities? You wouldn’t be the first — it’s more or less a bull-market tradition to peek at growth estimates right around Thanksgiving and declare the rally in stocks doomed. Indeed, the S&P 500 is currently up 24% ahead of a year in which gross domestic product isn’t expected to crack 2%. Still, you may also be surprised to note that  a $25 trillion rally was built on GDP growth no better than that. In 2012, stocks rose 13% in the run-up to a year in which the economy did no better than it’s expected to do in 2020. Oh and 2010, when pretty much the same thing occurred. In fact, the consensus prediction for 2020 GDP matches the average annual growth rate over the last decade, a period in which stocks surged sixfold. Not that it couldn’t be different this time around. A lot could go wrong in the next 12 months. But anyone premising an investment thesis on anemic growth expectations should be aware that waiting for the economy to do a lot better than it’s supposed to in 2020 has been a recipe for missing $25 trillion of share appreciation.

To contact the editor responsible for this story: Chris Anstey at canstey@bloomberg.net