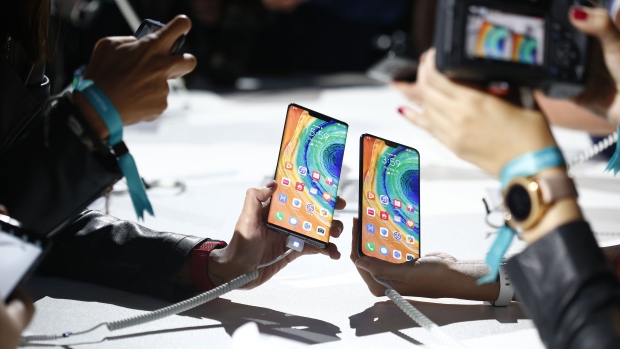 Attendees take photographs of the new Huawei Technologies Co. Mate 30 smartphones during the device's unveiling in Munich, Germany, on Thursday, Sept. 19, 2019. The Huawei Mate 30 and Mate 30 Pro mark the brand’s first top-of-the-range device launch since it was forbidden in the spring from trading with American partners. Photographer: Michaela Handrek-Rehle/Bloomberg , Bloomberg

The U.S. won’t cut any more China tariffs before the American presidential election in November, a sweeping round of job cuts has started at UBS’s wealth management unit in Asia and Europe and JPMorgan just posted the best year for any U.S. bank ever. Here are some of the things people in markets are talking about today.

There’ll be no more cuts to the existing U.S. tariffs on billions of dollars of Chinese goods until after the American presidential election in November, people familiar with the matter said. What’s more: Any move to reduce them will hinge on Beijing’s compliance with the terms of a phase-one trade accord. The two sides have an understanding that the U.S. will review progress and potentially consider additional cuts on tariffs affecting $360 billion of imports from China — but that’ll be no sooner than 10 months after the signing of the agreement at the White House Wednesday, the people said. The period of review, which isn’t expected to be specified in the deal’s text, is intended to give the Trump administration time to verify the Asian nation’s adherence to the terms of the pact. Meanwhile at home, the Trump administration plans to restrict the news media’s ability to prepare advance stories on market-moving economic data, according to people familiar with the matter.

Stocks in Asia were set for a muted start Wednesday as investors assessed a report that tariffs on billions of dollars of Chinese goods will likely stay in place until after the presidential election. U.S. stocks edged lower with Treasury yields, futures were flat in Japan and Australia, but nudged higher in Hong Kong. The S&P 500 Index slipped after rising to an intraday record high earlier in Tuesday's session. While positive results from big banks had pushed prices higher, concerns remain about progress in U.S.-China trade negotiations. Treasuries climbed after a gauge of underlying inflation rose less than forecast. Elsewhere, oil ticked higher and gold remained steady.

Better Than The Rest

JPMorgan just posted the best year for any U.S. bank in history. Fueled by a rebound in trading, especially in fixed income, the company said profit jumped 21% in the fourth quarter, pushing annual earnings to a record $36.4 billion. The announcement led off this week’s round of industry profit reports on a high note, though analysts are predicting results for 2020 will come back down to earth. Fourth-quarter fixed-income trading revenue came in $1 billion higher than analysts predicted as the bank benefited from an active final few weeks of the year and gains in securitized products and rates. It marked a stark comeback from last year’s fourth quarter, when wild market swings kept clients on the sidelines and JPMorgan’s bond-trading unit posting its lowest revenue since the financial crisis. Shares of the company, which have surged 38% in the past 12 months, advanced.

A sweeping round of job cuts at UBS’s global wealth management unit in Europe and Asia has started. Job losses are taking place at every level from managing directors to assistants: UBS has cut as much as 20% of the workforce in some European teams and is reducing management layers in Asia, people with knowledge of the matter said, asking not to be identified as the matter is private. Asia has introduced a new organizational structure and will be followed by Western Europe, Central & Eastern Europe, Middle East & Africa. Co-heads Iqbal Khan and Tom Naratil are restructuring UBS’s most important business to rein in costs and speed up decision making after Chief Executive Officer Sergio Ermotti gave them 60 days to devise a plan to turn around the unit. While UBS hasn’t communicated the extent of the cuts, people familiar with the matter have said it will likely affect about 500 employees.

Huawei Technologies just helped China overtake Germany when it comes to receiving U.S. patents. The telecom company broke into the top 10 recipients of U.S. patents last year, according to an analysis of filings with the U.S. Patent and Trademark Office. It’s the latest sign that Chinese companies are aggressive in pursuing the U.S. lead in global technology. Huawei’s 2,418 patents, along with 2,177 new patents issued to display-screen maker BOE Technology Group, propelled China into the rank of fourth-biggest recipient of U.S. patents, behind Japan and South Korea but ahead of Germany for the first time, according to the analysis by Fairview Research’s IFI Claims Patent Services. “China’s growing rapidly but they’re still way behind the U.S. in terms of patents,” said Larry Cady, a senior analyst with IFI.

To contact the editor responsible for this story: Alyssa McDonald at amcdonald61@bloomberg.net