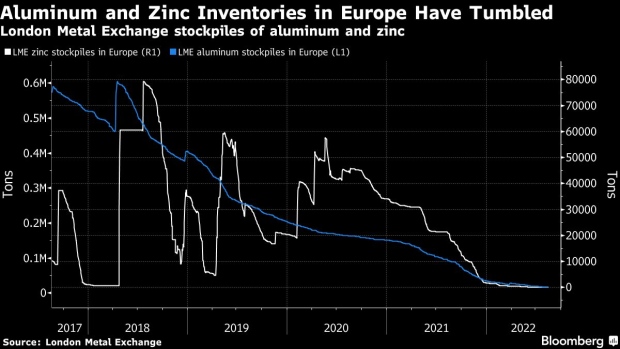 A worker prepares to unload a delivery of steel beams from a truck at the Sotral-CI steel and aluminum processing company, part of the Yeshi Group, in the Yopougon industrial district of Abidjan, Ivory Coast, on Thursday, May 19, 2022. Yeshi Group is parent to twenty companies across seven African nations. Photographer: Andrew Caballero-Reynolds/Bloomberg , Bloomberg

(Bloomberg) -- Europe’s energy crisis is getting worse, piling pressure on the commodities industries that provide building blocks for the continent’s economy.

Power- and gas-intensive sectors such as steel, fertilizers and aluminum -- the most widely used base metal -- are being forced to close factories or pass on soaring costs to customers. Even sugar makers are feeling the pinch.

The tumult risks further squeezing households during the worst cost-of-living crisis in decades and pushing economies into recession. Europe’s gas crunch deepened over the weekend as Russia decided not to turn the crucial Nord Stream pipeline back on after maintenance. If things aren’t bad enough now, they could get much worse this winter, when gas supplies are set to get even tighter.

Much will hinge on how policy makers intervene in the energy market. The European Union is considering measures such as price caps, reducing power demand and windfall taxes on energy companies. It’s unknown whether any help is on the way for industry.

Here’s how different raw-material businesses are faring so far:

Europe lost about half of its zinc and aluminum smelting capacity over the past year as jaw-dropping electricity prices make the energy-intensive production unaffordable. More capacity is set to go offline if the situation doesn’t improve.

Alcoa Corp. said it would cut output by a third at its aluminum smelter in Norway, while Norsk Hydro ASA said it plans to shutter one of its own in Slovakia at the end of September due to soaring power prices. Speira GmbH is considering slashing production at its German smelter to 50% of capacity.

Nyrstar announced it will halt the giant Budel zinc facility in the Netherlands. With local exchange stockpiles incredibly low, these curtailments may put more dependence on imports to meet demand. Relief may arrive from China, whose own power crunch has begun to ease.

While copper producers have been less exposed to the energy crisis due to lower consumption, they’re still being squeezed. For example, some are passing on costs to customers through energy surcharges.

Europe’s steelmakers are also being hit by higher energy bills, with those relying on electric-arc furnaces the worst affected. Many mills using those furnaces could remain offline following the end of scheduled summer maintenance.

The continent’s biggest producers, including ArcelorMittal SA, are reacting to higher costs by raising prices. Though that worked last year thanks to the strength of economic growth after the pandemic, it will be more of a challenge this time as a weaker economy darkens demand prospects.

European fertilizer companies rely on gas to make crucial nutrients and are again having to curtail operations, as are their counterparts in China. Farmers are clambering to keep the world fed, and even-higher fertilizer prices and less availability could force them to use less, risking smaller harvests.

More than 70% of Europe’s production capacity has been curtailed, with Yara International ASA, CF Industries Holdings and Achema AB among the companies announcing output cuts. Global nitrogen fertilizer usage next season is set to drop the most since 2008, according to International Fertilizer Association forecasts.

Fertilizer shutdowns are also threatening to curtail supplies of carbon dioxide, which is produced as a byproduct. CO2 is a vital part of the food supply chain and is used to stun livestock for slaughter, as well as in packaging to extend the shelf life of foods and for dry ice that keeps items frozen during delivery.

European sugar giant Suedzucker AG, which warned of higher prices as producers pass on costs, said it has emergency plans to switch from gas to other energy sources amid halts in Russian flows. But analysts say that could be an expensive process and mean even costlier sugar for consumers, further adding to grocery bills that jumped after global food prices hit record highs.

German production already was expected to be significantly lower than the year before due to a lack of rainfall, according to the industry association WVZ.