Eileen Wilson says she’ll be spending less this year on holiday shopping compared with last year because money is tight and the cost of living has gone up.

The retired Canadian civil servant says she clips coupons to save money on basics and has been checking online every day to get the best deal on video games for her two grandchildren for Christmas.

“I’ve been doing pretty good so far,” Wilson, 76, said during an interview at an Ottawa shopping mall.

Wilson isn’t alone in paring back spending. Retail sales in Canada are on pace for one of their worst years on record for growth, raising red flags about the health of the nation’s consumer. Sluggish spending at malls may only be a sign of things to come for an economy awash in household debt and unable to find other drivers to replace consumption.

Retail receipts for the first nine months of 2019 are up just 1.6 per cent from a year earlier, the slowest pace outside of the last recession since at least 1992. In volume terms, the deceleration is even more pronounced, with real retail sales up just 0.7  per cent this year. Statistics Canada releases October retail sales data on Friday. 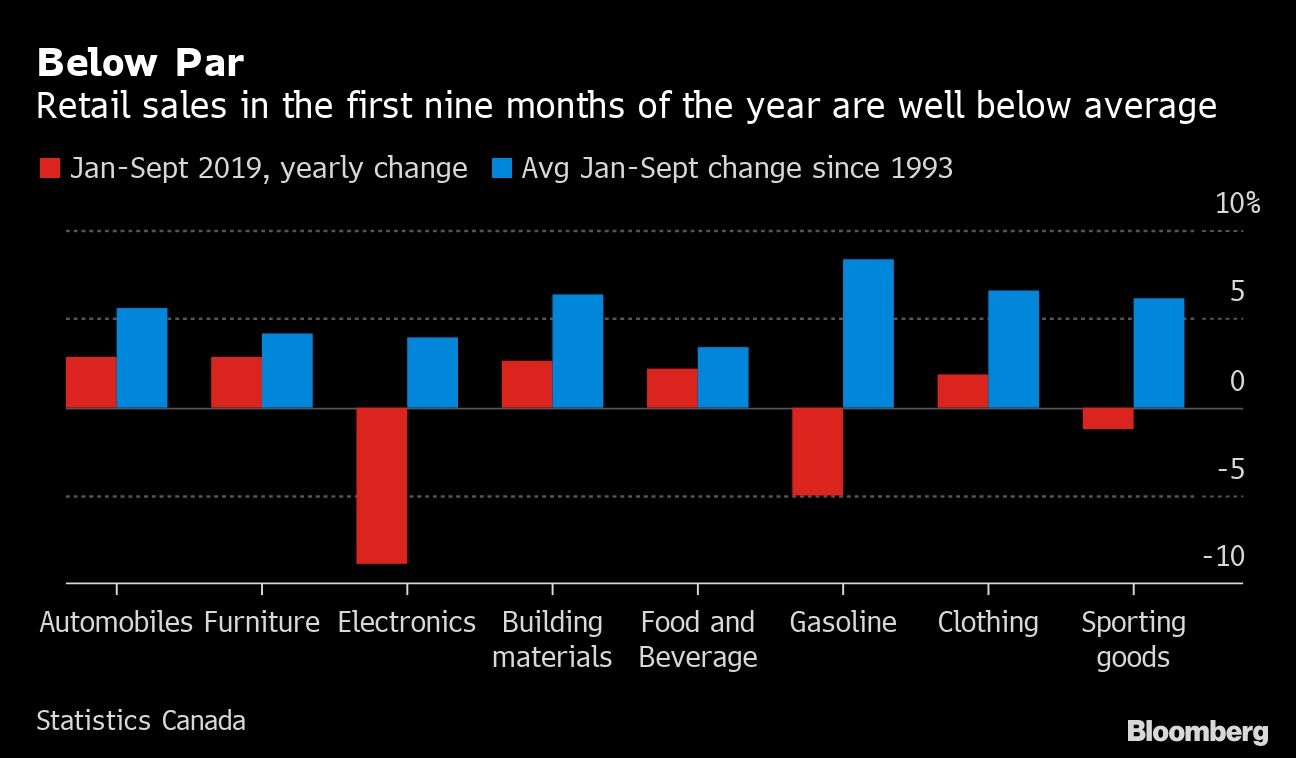 The slump has been across the board, from cars to food to clothing, highlighting the broad nature of the slowdown, “which could signal that things may get a bit worse before they get better,” said Jennifer Bartashus, a senior analyst at Bloomberg Intelligence, evident in slowing sales growth at companies such as Loblaw Cos., Canada’s largest grocery retailer and the parent of Joe Fresh clothing stores, and Empire Co., which owns supermarket chain Sobeys Inc.

The malaise in retail is only the most visible symptom of Canada’s strained households, which are showing signs of fatigue as high debt burdens take their toll. Excluding housing, annual growth in total household consumption -- everything from the purchase of televisions to spending on health care -- has averaged 1.1 per cent in real terms over the past four quarters, the slowest pace outside recession since at least 1962.

More than half of respondents in a recent Equifax Canada survey said they plan to spend less on gifts this holiday season, and 46 per cent said they would limit spending because they’re already carrying too much debt. Canadians owe $1.76 for every $1 of disposable income. They spend a record 15 per cent of disposable income to pay principal and interest on debt.

“We see a customer that is resilient but that is very value-oriented,” Michael LeBlanc, senior adviser at the Retail Council of Canada, said in a phone interview. “That’s nothing new particularly for Canada, but it seems to be more accentuated.”

The squeeze on discretionary income is making Canadians more careful, LeBlanc said, which has actually been good for discount merchants such as Dollarama Inc., whose stock has outperformed other retailers this year.

A tapped-out consumer is adding to broader structural changes, driven by technology, that pose additional challenges. Less money on the table means Canadians are changing the way they shop, driving online sales higher and leading to new trends such as the growth of the rental clothing market.

It could be worse, given the high debt levels. While slowing, consumption in Canada at the very least is still growing and is expected to remain a driver of the nation’s expansion even in its weakened state. Analysts are anticipated real household consumption to grow at about 1.7 per cent annually over the next two years, helped by a recent jump in employment that is fueling sharper-than-expected income gains. That should support spending and help households repair balance sheets. The household savings rate rose to 3.2 per cent in the third quarter, for example, the highest since 2015.

Still, pressure on sales is only increasing. For many retailers, “flat is the new up,” LeBlanc said.