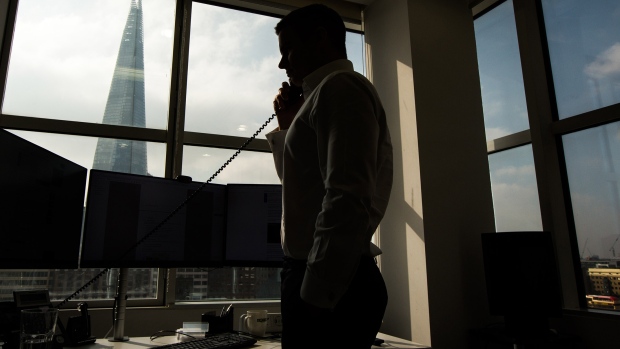 An employee uses a fixed-line telephone while looking at financial data on computer screens in an office overlooking The Shard on the trading floor of Bats Europe, the European arm of Bats Global Markets Inc., in London, U.K., on Monday, March 14, 2016. Bats Global Markets Inc., which runs U.S. and European stock markets, warned in a filing that a withdrawal by Britain from the European Union, or \"Brexit,\" could damage the London business climate enough to drive some or all the company\'s operations out of the U.K. , Photographer: Jason Alden/Bloomberg/Bloomberg

Rules to be proposed by the Commodity Futures Trading Commission will lay out a set of principles that exchanges must adopt in overseeing markets where computer-driven trading occurs at lightning-fast speeds, according to four people with direct knowledge of the matter. In a major change from earlier plans, the CFTC is dropping a controversial provision that would’ve made it easier for the agency to obtain traders’ computer code.

U.S. regulators have been scrutinizing the market impact of algorithmic trading since it was implicated in the so-called Flash Crash that briefly erased $862 billion of equity value in May 2010. The CFTC’s initial rule proposal came after Michael Lewis’s 2014 book “Flash Boys” argued that high-speed trading was rigging markets against other investors. The agency shelved the rule after making tweaks in response to industry and internal resistance to the source code provision.

In response to question at his Senate confirmation hearing in March 2019, CFTC Chairman Heath Tarbert said that he planned to take a fresh look at the measure, known as Reg AT. A CFTC spokesperson declined to comment.

In addition to dropping the provision giving it easier access to computer code that firms consider to be their intellectual property, the CFTC is also backing away from a part of an Obama-era proposal that could have led to high-frequency traders having to register with the agency, according to three of the people. The new version instead will formally require exchanges to take steps to prevent unintentional disruptions due to algorithmic trading, two of the people said.

The plan, which is still being negotiated at the agency, could be introduced as soon as next week, the people said.

Separately, the CFTC is also poised to finalize a rule that would bar swaps trading platforms from disclosing the identities of participants after a transaction occurs. The plan, which the agency’s commissioners voted unanimously to propose last December, has been generally opposed by major Wall Street banks who argue that the changes will reduce liquidity and could disrupt markets.