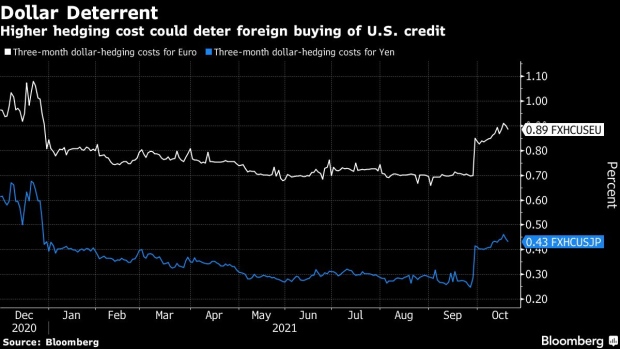 (Bloomberg) -- The inflation fears that have clobbered short- and intermediate-term U.S. Treasury notes this month could spell trouble for credit markets, according to Bank of America Corp. strategists.

Worries about rising inflation have shrunk the gap between shorter- and longer-term Treasury yields. That kind of yield curve flattening historically hurt investment-grade corporate bond returns, strategists wrote in a report this week that makes the direct opposite call that JPMorgan Chase & Co. made this week.

BofA expects risk premiums to widen substantially for intermediate maturities, and thinks spreads will widen overall. The average spread on the Bloomberg U.S. Corporate Investment Grade Index stood at 85 basis points at Tuesday’s close, near the narrowest level for the year of 80 basis points in June.

The difference between 5-year and 30-year Treasury yields reached about 85 basis points this week, the narrowest since April 2020. It’s since widened a bit to 96 basis points, but the curve is still substantially flatter than its 157 basis point level in May.

“Slower earnings and GDP growth from supply disruptions reflect strong demand (a positive) and are not a negative for credit spreads as the demand will be delayed in most cases rather than reduced,” strategists led by Eric Beinstein wrote.

A total of 16 deals were sold in the primary market on Wednesday, including Italy’s 5 billion euro ($5.82 billion) green bond tap.

China cut its borrowing costs on a $4 billion bond sale, in a sign that concerns have eased over risks of contagion from a debt crisis at a major developer.