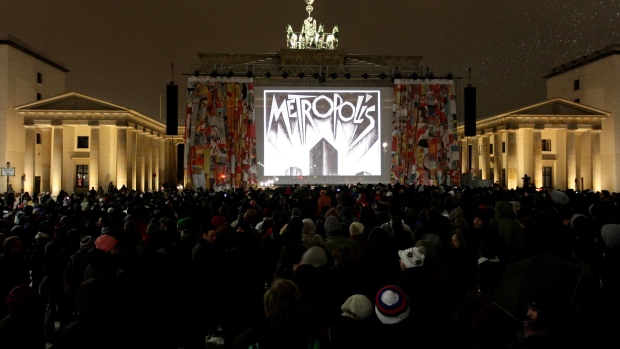 Choose your dystopia: The fictional 21st-century city or the real one. , Photographer: Sean Gallup/Getty Images Europe

(Bloomberg Opinion) -- Anyone who’s ever taken the London Tube or New York subway during rush hour will feel right at home watching Fritz Lang’s 1927 sci-fi dystopia Metropolis. Crowds of workers, heads down and shoulders hunched, march through underground tunnels on their way to daily drudgery while the wealthy live in pleasure palaces high above.

If the movie was remade today, there would be even more dystopian elements of 21st-century life to add: Overvalued real estate totally out of whack with workers’ earnings and a Covid-19 pandemic that has turned densely populated and vibrant cities into barren spaces where human contact is avoided. Simple pleasures like going to a concert now mean wearing a mask and doing a temperature check. If 1960s New York had been like this, Bob Dylan might very well have stayed in Minnesota.

Small wonder that city dwellers, emerging from months of lockdown, are now readier than ever to quit their urban homes and search for leafy utopias. Properties for sale are flooding the market in Paris and London, and prospective buyers are increasingly looking for homes with gardens — the kind of place where you’d be glad to work remotely — rather than apartments with an average area of 30 to 40 square meters (323 to 431 square feet). Nearly a third of Americans are considering moving to less densely populated areas, according to an April survey by Harris Poll. Wealthy New Yorkers, who once looked down on anyone quitting the vibrant city for a McMansion and manicured lawn, are doing exactly that.

But even if an urban real-estate correction looks unavoidable — even healthy — we shouldn’t write off post-pandemic cities too quickly.

While it’s clear that metropolises simply aren’t set up for a life of lockdowns and social distancing, it seems very pessimistic to imagine these are long-term phenomenons. It supposes human ingenuity will totally fail to either treat, vaccinate against or find better ways to live with Covid-19. Cities have bounced back from deadlier epidemics, like cholera or the plague, and some of the greatest achievements in urban development — such as sanitary water and waste systems — were responses to disease. A vaccine is obviously more complex than, say, the removal of a handle from a pump that halted cholera in 1850s London. But finding one is not impossible.

As for remote work, it seems very optimistic to imagine that permanently working from a grassy suburban lawn far from the office is going to be a breeze. White-collar workers who have job security or a successful self-employed career might find it easy. Single mothers and women in couples who bore the brunt of duties such as childcare and housework during the lockdown might not.

One French survey of more than 1,540 people found that a fifth of under 30s — whom you’d expect to be the most at ease with Zoom and least interested in water-cooler gossip — wanted to go back to the office. A good proportion of those starting out on the career ladder prefer face-to-face training, networking and socializing to brainstorms by Slack. And the jury’s still out on what widespread remote working does to employee motivation, productivity and mental health. In 2013, for example, the internet search company Yahoo! banned working from home, saying it hurt “speed and quality.” Companies clearly expect to save office and staff costs (why pay city wages to suburban workers?) but there are downsides too.

The old trade-offs involved in moving to the exurbs or suburbs aren’t going to disappear overnight. France’s Gilets Jaunes stormed Paris precisely to protest the decaying quality of life outside cities. The typical U.S. city resident lives near almost three times as many jobs as a typical suburbanite, according to the Brookings Institution. Those jobs pay better, too, with average wages per worker in urban areas some 46% higher than lower-density suburbs. So it’s likely that making the move will mean trading subway rides for car commutes. And when journeys get longer, there’s generally less inclination to travel to enjoy the fun stuff — the so-called “friction of distance.”

And make no mistake, the fun stuff will be around as long as cities can keep attracting people, money and ideas. In the 1980s and 1990s, metropolises such as London and New York reversed decades of decline by focusing on services such as finance and leisure rather than factories. While it’s true that excessive property speculation turned them into playgrounds for the rich, threatening their draw as diverse and creative melting pots, things could change for the better. The next reinvention, according to urbanism expert Laurent Chalard, will be about making cities less dense and more livable: More cycling, fewer cars, bigger homes. Outside the city, life may end up less green and less convenient.

The great cities of history — Athens, Rome, Baghdad, Constantinople — showed the tremendous network effects of mixing commerce, art, science and power in one place. It would take a truly radical shift to make cities obsolete. Maybe once society really values the online agora of Twitter or the marketplace of Amazon over the physical versions, the city’s ability to compress space and time might look pointless. But that sounds depressing enough to justify a remake of Lang’s Metropolis — to be streamed safely away from the crowds, of course.