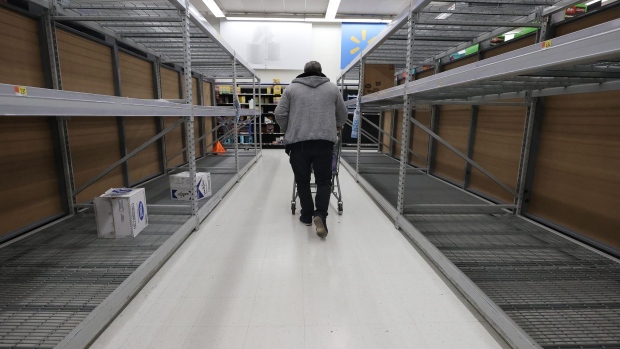 (Bloomberg) -- The Brooklyn neighborhood of Dumbo is one of the richest in New York. Rachel Preston ventured there over the weekend and found markets completely cleared out of basics like bread. When she returned home to Crown Heights, just a few miles away but with more modest incomes, there was no bread shortage.

Preston, 31, a planning manager for a retailer, said that spoke volumes about the biggest city in the U.S. People with money can afford to spend on their wildest fears while those without have more limited choices. “I’m not as concerned,” she said, after purchasing a package of English muffins.

Crisis shopping traces the same economic divisions as normal shopping. As the city hunkered down in the coronavirus pandemic, people stripped bare shelves in trendier grocers including Whole Foods and Trader Joe’s, while downscale supermarkets such as Key Foods and Gristedes remained well supplied.

Much of the New York was consumed by preparing for the first full week under the national emergency President Donald Trump declared on March 13. The impact will be forcefully felt on Monday: Governor Andrew Cuomo on Sunday ordered public schools be closed. There are at least 729 confirmed cases of coronavirus in the state, and there have been three deaths.

For some New Yorkers, getting ready meant getting out of town. Pedro Escudero took his young daughters out of school and moved his family to a house he rented outside of Manhattan. He can make trades for DPM Capital, the hedge fund he works for, from there, he said, and plans to keep his car tank full in case the family needs to keep moving.

The population in parts of the Hamptons normally reserved for vacation retreats had swelled to summertime levels. The urban refugees retreating anxiously to summer homes made runs on local grocery stores and banks. A New Yorker who visited a Chase branch in Southampton to take out $30,000 on Friday told Bloomberg News the bank had imposed a $10,000 limit on withdrawals. Several banks in the area were facing large requests.

In Manhattan, at the farmers market in Union Square, the paranoid edge to acquiring could be felt at one booth in particular. “People are super into beans,” said Leonardo Ballerini, sales manager for GrowNYC Grains.

Those stocking up to make the run out to the Hamptons or beyond stood in lines along with New Yorkers who benefit from the Supplemental Nutrition Assistance Program, or SNAP, which provides basic food aid to the needy. In one sign of economic disparity, vendors said the use of SNAP was steady or lower than on a typical weekend, even as many also reported extraordinarily high cash and credit-card sales volumes.

Regardless of their socioeconomic status, New Yorkers suddenly wanted beans. Ballerini had sold through beans in less than two hours in Union Square and was out of stock at another location at another farmers market in Brooklyn. (A Wegmans supermarket in Brooklyn was also almost entirely sold out of dry beans by Sunday afternoon.) Other pantry staples sold fast at the farmers market: Mountain Sweet Berry Farm sold through about 4,600 pounds of potatoes, about four times its usual sales; jars of pasta were gone at the City Saucery booth  and eggs from Gail’s Farm were gone before noon.

One SNAP user, who declined to be identified, bought an extra carton of eggs and stocked up on pasta at the market. Food-assistance benefits can’t be accessed in advance, making stockpiling impossible for those who depend on government support. These benefits were at risk before a federal court last week blocked a rule change that would have forced 700,000 Americans off food assistance on April 1. A coronavirus bill that passed in the U.S. House seeks to strengthen SNAP.

For workers in the city’s gig economy, the hard times are already starting. Nathaniel Allard, a dog walker and trainer in Brooklyn, said his business has declined 30% as his clients are told to work from home. He’s not sure if his savings will outlast the virus. And he’s worried about getting sick himself, as his job requires him to regularly use public transportation and interact with pet owners.

“I have been diligent about using Purell and fanatic about washing my hands for 20 seconds, but I can’t help but feel that it’s only a matter of time before I get sick,” Allard said. “If that happens, I have to cancel everything. I won’t risk getting others sick.”

Jean Luigi Porreca spent the last few weeks being worried about his family back in his hometown of Termoli, Italy. Now the 42-year-old waiter is reckoning with the effects of coronavirus in New York, losing 80 percent of his income overnight. His restaurant, Montesacro, saw reservations fall from the average of 100 to only 30 on Saturday. “I need to find a way to delay my rent with my landlord. I don’t have much in savings,” he said. “I am thinking of doing delivery. If people keep buying supplies, they will need delivery.”

The delivery business is the future for many service workers. Violet Hill Farm at Union Square was already advertising its own delivery service: “Curbsidefarmer@gmail.com (In case it hits the fan).”

Restaurants are also banking on deliveries to keep them afloat in the new era of social distancing. Some restaurants that have never offered delivery are launching service effectively overnight, using their own employees instead of a third-party service like Uber Eats. This saves money and preserves staff jobs, which are becoming scarce as even prominent restaurateurs such as Danny Meyer close up shop for the foreseeable future.

A group of industry professionals banded together to create a “bond” program to support trendy restaurants. Others are focusing on following wealthy clients with offers of specialized services at their second homes. The Major Food Group, whose trendy restaurants include Carbone, Dirty French and the Lobster Club, sent an email offering catering and home-chef services to customers in the Hamptons.

--With assistance from Kate Krader and Katia Porzecanski.

To contact the editor responsible for this story: Aaron Rutkoff at arutkoff@bloomberg.net, Anne Reifenberg