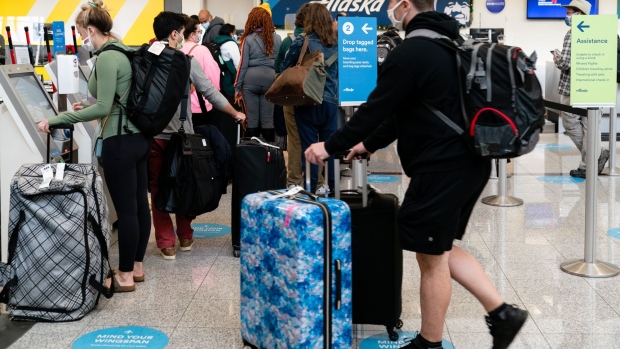 (Bloomberg) -- A California law requiring rest and meal breaks for workers has become a fierce battleground between airlines and flight attendants that may soon draw in the US Supreme Court.

At stake is whether carriers are subject to local labor laws, or can instead follow federal aviation rules that are more focused on passenger safety than working conditions. Airlines say having to abide disparate state regulations could cause chaos at a time when the industry is already struggling to cope with a surge in travel demand amid a worker shortage.

Within days, the high court’s justices are set to decide whether to hear an airline appeal in a suit brought by flight attendants, and backed by their unions, who are demanding California’s labor protections.

For the flight attendants, the case is part of a far broader fight to receive basic labor protections that they say have been systematically stripped from them. It comes as US labor unions are enjoying somewhat of a revival amid growing power for workers in a tight labor market and victories organizing workers at companies including Starbucks Corp. and Amazon.com Inc.

The 9th US Circuit Court of Appeals last year ruled that a group of flight attendants at Virgin America Inc. -- which is now part of Alaska Air Group Inc. following a merger -- were entitled to protections from California’s law requiring a 30-minute meal break after working five hours as well as other breaks. While details of how the law would be enforced for airlines haven’t been worked out, it would at least apply to flights within the state for flight attendants based there.

The ruling potentially puts the California law in conflict with the Federal Aviation Administration’s regulations mandating that flight attendants be ready at any time to handle emergencies, and that they remain on duty for critical phases of flight, such as landings and takeoffs. Flight attendants are responsible for helping passengers to their seats and serving food, but their primary responsibilities under federal law are safety-related, such as assisting during an emergency evacuation.

California courts have held that employees can’t be considered on-call during breaks, said Riva Parker, the vice president of labor and employment litigation at Airlines for America, a group representing large carriers.

“California law is so proscriptive about what you have to do, and when, that it’s impossible to comply with it under federal law,” Parker said.

A study conducted for the trade group earlier this year by the consultants InterVISTAS found it could cost the airline industry more than $3.5 billion a year, assuming they had to add staff to flights to comply with the law.

Labor groups -- and a recent brief filed by the US Solicitor General -- argue these dire predictions are overblown.

After evaluating Alaska Airlines’ request for the Supreme Court to review the lower court’s decision and considering briefs filed by others, the justices will vote on whether to take the case, send it back for more review or leave the appeals court ruling intact. The court takes up a case only if four justices vote to hear it.

The Solicitor General, which acts as the federal government’s legal representative on such cases, has come down on the side of the union, urging that the justices shouldn’t take the case or, alternatively, should send it back for further review.

Flight attendants generally have time to sit and to eat on flights, “suggesting that there would not be such an impact” if airlines were forced to follow California’s rules, the Solicitor General wrote in the brief. The Department of Transportation and FAA are prepared to hold discussions on how to minimize the disruptions from the law, the brief said.

There’s precedent for airlines avoiding local rules that they say would clash with laws that deregulated their industry or that set safety requirements. Flight attendants have said those similar cases have impeded their rights compared with other workers.

After years of lobbying by a Southwest Airlines Co. flight attendant, Illinois lawmakers last year revised a law that had excluded the group from using sick time to care for ill relatives. Similar issues have sparked confrontations in recent years in Washington state, Massachusetts and New York.

“Flight attendants are workers and humans just like any other worker in California or any state,” said Sara Nelson, president of the Association of Flight Attendants-CWA.

While the case only involves flight attendants, airlines fear it opens the door to requiring rest breaks for pilots, who are permitted to eat and take restroom breaks during low-workload periods but on typical domestic flights are expected to be on duty at all times in the event of an emergency.

One reason the case is so important to airlines is that they are likely to get a more pro-business outcome in the Supreme Court than with California’s lawmakers, said Catherine Fisk, a professor at the University of California, Berkeley, School of Law.

“The usual way of dealing with a policy disagreement is to get the legislature to enact a law,” said Fisk, who specializes in employment and labor law. “What’s significant here is apparently the airlines couldn’t persuade the California legislature.”