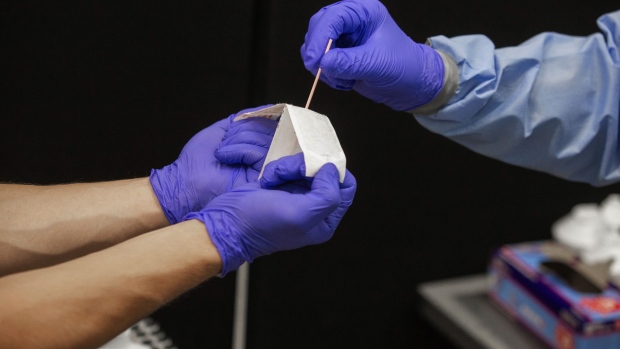 (Bloomberg) -- Dozens of Chinese nationals gathered outside their embassy in Singapore on Tuesday in frustration over new rules requiring them to get tested for Covid-19 before they can board their upcoming flights home, something Singapore doesn’t generally offer to those without symptoms.

“No hospital in Singapore will perform a test for me,” said a 28-year-old warehouse manager who gave his surname as Wang. He’s scheduled to fly to the western city of Chongqing at the end of the month. “Booking a flight is very tough now and I don’t want to miss my flight.”

The crowd surrounded flustered embassy officials and grew raucous, even as a police vehicle arrived. The new requirements from China, instituted after dozens of passengers from Singapore tested positive in virus tests after landing there, highlights the fragility of tentative travel arrangements established by countries to boost economic activity and help the ailing aviation industry.

It’s also a blow to Singapore’s efforts to kick start international travel amid the pandemic, fueled by its reliance on the aviation sector as an international hub. The city-state was one of the first to establish a corridor with the world’s second-biggest economy, and is negotiating arrangements with other major trade partners like Japan.

In recent weeks, at least three flights departing from Singapore have hit the “circuit breaker” instituted by the Civil Aviation Administration of China, which triggers a week-long suspension of routes where five passengers onboard test positive. If 10 or more infections are found, the suspension grows to at least one month.

China Southern Airlines Co.’s flight to Guangzhou was suspended for a week after five passengers tested positive upon arrival in the southern city, the company said. Juneyao Airlines Co. also hit the circuit breaker earlier this month, forcing it to cancel its flights between Singapore and Shanghai scheduled for Friday, the company said on its official Weibo account.

Meanwhile, the only direct flight from Singapore to northern China -- operated by Singapore Airlines Ltd.’s Scoot -- was suspended after 12 people on board tested positive upon arriving in Tianjin last week, according to a person familiar with the matter, who was not authorized to speak publicly. Scoot did not immediately respond to a request for comment.

The detection of cases came even as Singaporean authorities conducted a mass testing campaign to weed out symptom-free migrant worker carriers. New infections have recently surfaced in at least one of the dormitories, though reported cases among the rest of the population hover close to zero.

Singapore’s Ministry of Health told Bloomberg that 12 cases detected on the flight were workers who have recovered but “may continue to shed viral fragments for weeks or even months,” adding that there’s no evidence people who have had the virus and recovered are infectious. It said that both countries are investigating two other cases.

Singapore’s Ministry of Foreign Affairs did not immediately respond to requests for comment while China’s foreign ministry spokesman Zhao Lijian said on Tuesday that he hadn’t seen relevant reports on the situation. Multiple calls to the news department of the Chinese embassy in Singapore were unanswered.

Infectious or not, the cases pose a challenge to Singapore’s efforts to resume travel with countries that have gotten the virus under control. From Sept. 1, New Zealanders will be allowed to enter Singapore, where they will have to take a Covid test but won’t be quarantined, though most Singaporeans aren’t allowed into New Zealand. A similar arrangement was also offered to travelers from Brunei.

The situation may affect the continued operation of Singapore’s travel corridor with China, an arrangement that started in June and is termed a “green lane.” Those going through the green lane on essential or business travel can avoid the usual two weeks of quarantine upon arrival, provided they test negative before departure and upon landing. China has only agreed to two other travel corridors, with Germany and South Korea.

No flights from South Korea and Germany have been suspended since China’s aviation regulator instituted the circuit breaker in early June, though routes from places like Manila and Abu Dhabi have also triggered similar action.

The frustrated Chinese nationals gathered outside the embassy on Tuesday said that they could not get a virus test from any Singapore medical facility without displaying symptoms. Those interviewed were not traveling via the green lane and were mostly lower-wage workers prepared to undergo two weeks of quarantine upon reaching home.

Under the new rules, they won’t be able to board their flights without a negative test result.

Singapore’s health ministry said late Tuesday on its website that travelers could seek assistance in light of the new rules from China. Still, it reiterated its strategy focused on “diagnostic testing and active case finding” and that pre-departure testing is reserved for those using the green lane.