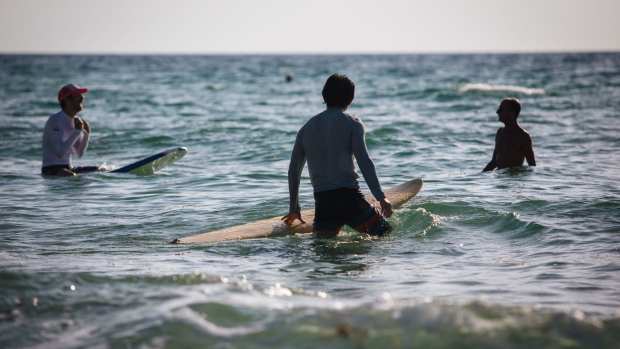 Surfers wade in the ocean in Miami Beach, Florida, U.S., on Wednesday, June 10, 2020. Delayed by more than a week, Miami-Dade's beaches reopened Wednesday after Mayor Gimenez said he's ending the curfew tied to a string of protests that remained peaceful and largely free of the isolated damage seen on the first night of demonstrations on May 30, according to the Miami-Herald. Photographer: Jayme Gershen/Bloomberg , Bloomberg

(Bloomberg) -- Florida’s Covid-19 cases rose on Sunday in line with the one-week average but still above 10,000 as the head of the U.S. Food and Drug Administration said it was too soon to tell if the Republican convention in Jacksonville will be safe.

The GOP nominating convention originally set for Charlotte was moved to Jacksonville -- including President Donald Trump’s acceptance speech -- after North Carolina Governor Roy Cooper, a Democrat, disagreed with hosting the Aug. 24-27 event at full scale out of concern of the virus spread.

“I think it’s too early to tell,” Hahn said on CNN’s “State of the Union” on Sunday, answering a question about safety. “We’ll have to see how this unfolds in Florida and elsewhere around the country.”

Florida Governor Ron DeSantis has resisted returning to a lockdown, but hospitals and local officials in the state are reacting to the rising trend in cases, but local officials have been taking their own steps.

The city’s famed beaches closed for Independence Day weekend, and the public response has been good, he said, “Obviously, they’re a little bit upset to some extent, but we’ve seen compliance,” Suarez said.

Cumulative hospitalizations rose by 160, or 1%, to 15,735, slowing from the pace from the day before. The median age of patients rose to 36 from 35 the previous day.

In response to steady increases in hospitalizations in Miami-Dade County, Jackson Health System, operator of one of Florida’s biggest hospitals, said last week it would limit inpatient surgeries and procedures to emergency and urgent cases.

The rate of people testing positive for the first time rose to 15% on Saturday, from 14.1% a day earlier.