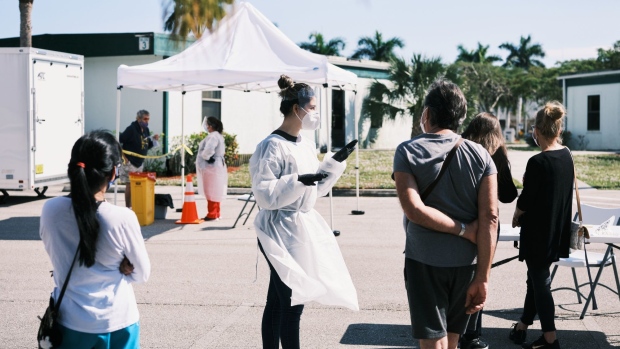 Lee County residents fill out forms prior to receiving a Covid-19 test at a testing site in Cape Coral, Florida, U.S., on Monday, Jan. 4, 2021. Florida, one of the hardest hit states in the spring surge, shattered its its previous record for new infections, at 17,192 in one day. Photographer: Zack Wittman/Bloomberg , Bloomberg

(Bloomberg) -- Florida reported 21,683 new cases on Friday, breaking a daily record for the entire pandemic, according to data from the U.S. Centers for Disease Control and Prevention.

The state’s previous one-day record, according to CDC data, was more than 19,100 in early January. As the highly infectious delta variant has spread around the U.S., new infections in Florida have skyrocketed over the last month, from a low near 1,000 new daily cases last month.

Florida, the third most populous state, now accounts for about 1 in 5 new virus infections in the entire U.S., making it the new epicenter of the outbreak in the country.

The state reports publicly once a week, but more often to the CDC, and on Friday reported 110,477 cases for the previous seven days. Weekly cases in the U.S. were almost 545,000, according to data from Johns Hopkins University and Bloomberg. The positive test rate of 18.1% is more than twice the national average of 7.8%.

Florida Governor Ron DeSantis, considered a possible Republican presidential candidate in 2024, has staked his record on keeping the state free from most virus restrictions, including mask mandates. On Friday he said he would sign an executive order that effectively would block Broward County, the state’s second largest that includes Fort Lauderdale, from reimposing a mask order indoors for students, teachers and school visitors.

“I just want to say, in Florida there will be no lockdowns, there will be no school closures,” he told supporters on Friday. “Floridians have been, are and will remain free to choose what’s best for themselves and their families.”