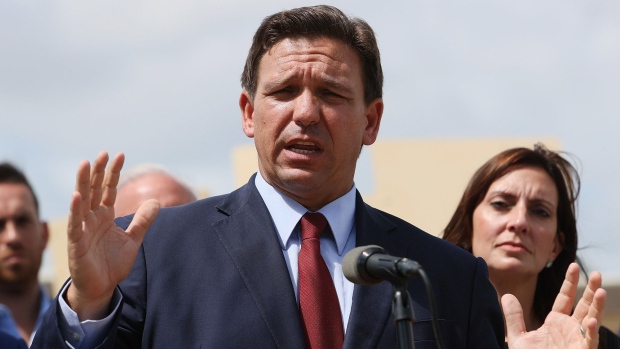 (Bloomberg) -- A group of Florida business owners sued to block Governor Ron DeSantis’s plan to expand gambling in the state, which includes bringing online sports betting to one of the biggest markets in the U.S.

The suit filed Monday in federal court in Washington by Miami developer Armando Codina, billionaire auto-dealership owner Norman Braman and others seeks to overturn a deal DeSantis reached this year with the Seminole Indian Tribe. Codina, Braman and the other plaintiffs claim the U.S. Department of Interior, which oversees gambling on tribal land, improperly approved the deal.

The deal allows the Seminole Tribe, which has long run casinos in the state, to expand into sports betting, open new venues and offer roulette and craps. In exchange, the tribe agrees to let the state license new casinos, as long as they are located at least 18 miles from Seminole Hard Rock Hotel & Casino near Fort Lauderdale.

The Department of Interior declined to comment. Seminole spokesman Gary Bitner said the suit will not get in the way of the tribe’s gaming expansion plans, which are allowed legally under this year’s compact.

“The Florida Legislature voted overwhelmingly in favor of the new Gaming Compact, which was then approved by the U.S. Department of the Interior,” Bitner said in an emailed statement. “It has the support of two-thirds of Floridians. It is law.”

DeSantis has said the deal will bring in $2.5 billion in new revenue to the state in the next five years. The odd choice of an 18-mile boundary has led to speculation among Florida lawmakers that the Republican governor, a close ally of former President Donald Trump and potential 2024 presidential contender, pursued the deal in part to allow gambling at Trump National Doral Miami, which conveniently just makes the mark.

Eric Trump, the former president’s son and an executive at the family real estate company, has previously suggested the Doral club would be an ideal gambling resort. The Trump Organization didn’t immediately respond to requests for comment.

The agreement has already drawn a pair of other challenges in federal courts in Washington and Florida, as the tribe plans to launch its sports betting operations this fall.