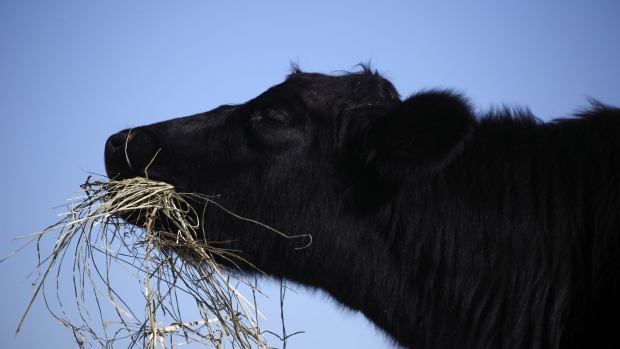 A black Angus cow eats hay at a farm in Pleasureville, Kentucky, U.S., on Wednesday, Jan. 8, 2020. Congress had authorized additional borrowing authority for the U.S. Department of Agriculture in coronavirus-relief legislation passed earlier this year, and the second round has been widely anticipated. Photographer: Luke Sharrett/Bloomberg , Bloomberg

(Bloomberg) -- Hurricane Ian barreled through about 40% of Florida’s beef cattle industry, destroying barns and fences and killing at least a few calves, according to the Florida Cattlemen’s Association.

“Ranches are kind of wrecked,” Jim Handley, executive vice president of the association, said by phone from Kissimmee. Many ranchers were able to move animals to higher ground before the hurricane made landfall but one operation lost two newborn calves, he said.

The key for animals now is for water on pastures to recede so they can resume feeding before hunger becomes critical. Handley said ranchers from neighboring states will bring in hay and other supplemental feed to help.

While Florida is not a major beef producer, the state provides supplies of young animals to top cattle states such as Texas and Oklahoma. Ranchers in the US Plains have also been battered by extreme weather -- drought withered pastures and prompted herd-culling earlier this year, with fewer heads of cattle signaling higher meat prices in the future.