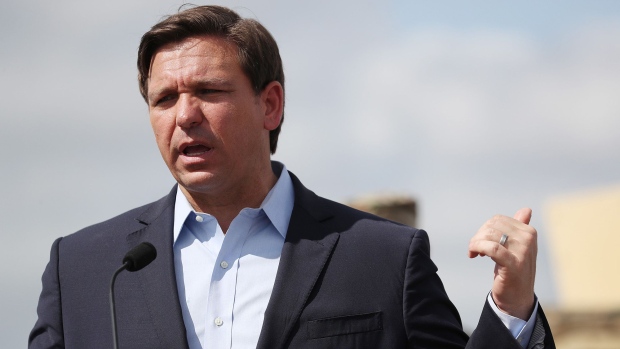 (Bloomberg) -- Florida Governor Ron DeSantis told residents to expect large budget cuts for the upcoming fiscal year that starts in July as officials contend with the loss of tax revenue caused by the coronavirus pandemic.

Florida lawmakers passed a $93.2 billion spending plan in March, before business shutdowns to slow the virus’ spread wrecked havoc on the state’s sales-tax dominated economy and threw 2.7 million Floridians out of work. DeSantis, a Republican, said he expects to make cuts through his power to veto certain parts of the budget and doesn’t anticipate that the legislature will need to convene before the November election to address the shortfall.

“There is going to be a lot more vetoes. There’ll be a lot of red,” he said during a Tuesday press conference, referring to changes he will make to the budget. “It’s kind of the veto equivalent of the Red Wedding from ‘Game of Thrones.’ There is going to be things in my budget that I am definitely going to veto just because the fiscal picture is different.”

According to local news, the budget hasn’t been formally sent to the governor’s office yet. Once it is delivered, DeSantis has the option to cancel specific appropriations. A two-thirds majority vote is needed to overturn any budget item vetoed by the governor.

Florida has taken a big economic hit because of the coronavirus-related shutdowns that halted tourism and quelled spending in a state that gets nearly 70% of its revenue from sales taxes, according to financial statements. In April, the state saw a $878 million revenue loss compared to estimates, according to a May 26 report from the Legislature’s Office of Economic & Demographic Research.

Florida has since started reopening its economy and seen the number of new infections surge.

“I think we are probably are going to hopefully recover quicker than we probably thought two months ago,” DeSantis said.

“But between the vetoes and I’m going to hold back some agency spending, and then we do have identified some CARES Act money that will be able to be used,” he said, referring to the federal funds available to defray virus-related expenses. “I have no worry about us getting to the election.”