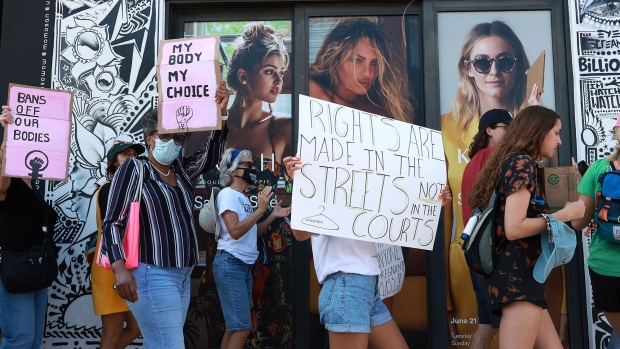 (Bloomberg) -- A Florida judge expressed skepticism about the state’s new ban on abortions after 15 weeks of pregnancy, pointing to a privacy provision in the state constitution that has long been interpreted to protect the right to the procedure up to 24 weeks.

Leon County Circuit Court Judge John C. Cooper in Tallahassee is weighing a request by Planned Parenthood to temporarily block the law before it takes effect on July 1. He kicked off a hearing Thursday by telling the state’s lawyers that the law has a “presumption of unconstitutionality” because Florida voters added broad privacy protection to the state constitution in 1980.

The showdown comes less than a week after the US Supreme Court eliminated the federal right to abortion, triggering outright bans in several states and kicking off a wave of lawsuits.

Florida’s privacy protection sets it apart from many of those states and was cited by Planned Parenthood in its lawsuit. Governor Ron DeSantis, who is widely seen as a potential Republican 2024 presidential contender, signed the new restrictions into law in April.

Cooper, who said he’d rule from the bench later on Thursday, picked apart the state’s argument that abortions after 15 weeks have a higher rate of mortality for the mother, comparing the claim to the risks of going to the dentist.

“If dentists are killing people while filling cavities, you wouldn’t ban all dentists from filling cavities,” he said, adding that colonoscopies “have a higher risk of death than legal abortion through the 24 week period.”

Cooper also pointed out that, during an earlier hearing on Monday, the state’s medical expert testified about maternal health problems tied to abortions despite having never performed the procedure.

The judge also suggested a ban after 15 weeks didn’t meet the same standard as a requirement that has been upheld in some states that abortion providers have admitting privileges at a nearby hospital.

“That technically is a restriction, but it seems to me it serves a compelling interest if we know there are going to be a certain number of complications,” the judge said. “That I think would be an example of a constitutional restriction.”

Though he peppered the state’s lawyer with questions, Cooper allowed Planned Parenthood’s lawyer, Whitney White of the American Civil Liberties Union, to present her arguments mostly without interruption.

White argued that the state hadn’t shown it has a compelling interest in narrowing the window for abortions, or that doing so would improve the health of women as the state’s expert claimed.

The ACLU lawyer said the state’s medical expert rejected the opinions of medical organizations that support abortion rights based on “her own speculation and innuendo that all of these organizations are infected with such extreme pro abortion bias that nothing they say or publish can be trusted.”