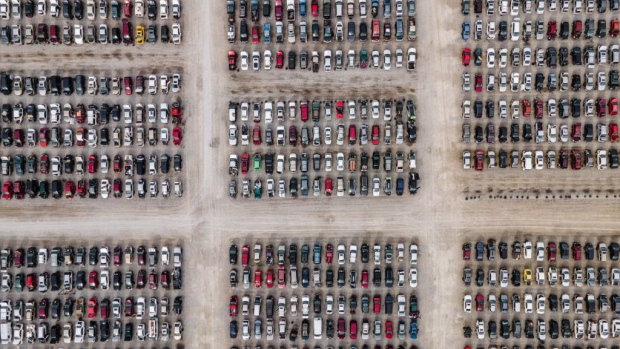 LOUISVILLE, KY - JANUARY 13: In this aerial view, rows of salvage vehicles ready to be picked for used parts are seen at Pull-A-Part on January 13, 2022 in Louisville, Kentucky. Due to the global supply chain slowdown and labor shortages, many auto repair shops around the US are experiencing difficulty ordering parts and fulfilling service requests. (Photo by Jon Cherry/Getty Images) , Photographer: Jon Cherry/Getty Images

(Bloomberg) -- A Florida-based auto lender that serves consumers with no or less-than-stellar credit is marketing $118.8 million of securities in its debut debt offering.

Southern Auto Finance Company has kicked off marketing for the subprime debt, according to Kroll Bond Rating Agency. The deal comes just as some early signs of stress appear in the market for auto loans, including higher rates of subprime borrowers missing loan payments and a “horrendous” earnings miss by CarMax tied to consumer concerns over affordability and inflation.

Investors in the new offering may also have questions about whether Hurricane Ian, which has left a trail of destruction across Florida, could impact the auto loans that back the bonds. As much as 57.5% of the collateral pool is in Florida, according to Kroll, which told Bloomberg it’s assessing the impact of the storm on any auto ABS deals that may have exposure to Florida.

Subprime auto lending is still safer than before the pandemic, analysts say. Nevertheless, the offering is poised to serve as a fresh test of investor appetite for the consumer-focused $65 billion subprime auto ABS market ahead of a possible recession, which would further dent household finances.

Pompano Beach-based Safco specializes in providing auto loans to people who might not normally be able to obtain such loans: first-time buyers, consumers seeking to rebuild credit and those with hard-to-verify incomes, such as self-employed workers, according to the company’s website.

Instead of relying on FICO credit scores -- the traditional metric for creditworthiness in the auto sector -- the company uses machine learning to evaluate factors such as time on the job, monthly cash flow, employment history, earning potential and phone bills. Loans that were pooled together for the bond have an average FICO score of 554 and a weighted average APR of 19.6%, according to Kroll.

The company’s debut issuance arrives as the market for auto loans begins to show some signs of strain. Delinquency rates on subprime auto debt have begun ticking higher after touching a post-pandemic low that was driven by stimulus payments.

Still, the rise in delinquency isn’t yet a concern, analysts say. The subprime 60-day delinquency in the first half of the year, about 4.38%, was still below the pre-pandemic delinquency rate that peaked at 5.93% in August 2019, according to a September report from Fitch Ratings.

“There’s still a lot of runway between where we are now and performance that could really negatively impact asset-backed auto loan bonds,” said Margaret Rowe, a senior director at Fitch.

The high rating for the largest slice of the bonds -- AA for a $96.5 million tranche -- implies the lack of a credit score doesn’t actually appear to be much of a hindrance when it comes to repayment. Safco has been making and collecting payments on these loans since 2016 and, historically, consumers without a FICO score have demonstrated lower losses than traditional customers, Kroll said in its report.

Safco isn’t the only auto finance firm that uses metrics other than credit scores such as FICO to evaluate borrowers’ creditworthiness. First Help Financial LLC, Tricolor Auto Group, and Lendbuzz Inc. are among companies that have issued auto ABS this year backed largely by loans without credit scores, according to Kroll.

“One of the growth areas is expanding the potential customer base to include those non-FICO borrowers,” said Eric Neglia, a senior managing director at Kroll.

Capital One Securities is managing the sale, according to a person with knowledge of the matter.

Safco was founded in 1990 and is majority owned by George Fussell, founder and chief executive officer, who along with his son Andrew owns 77.5% of the company, according to the Kroll report.