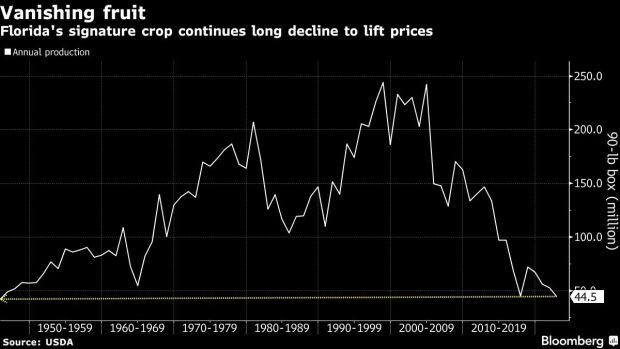 (Bloomberg) -- Orange juice futures surged to the highest in more than three years after government data showed Florida’s orange crop will shrink to the smallest since 1945.

The sunshine state will collect 44.5 million boxes this season, down 3.7% from a December estimate and 16% from a year earlier, the U.S. Department of Agriculture said Wednesday. A box weighs 90 pounds.

The March contract climbed as much as 6.4% to the highest for a most-active contract since September 2018. It rallied 21% last year.

Florida’s crop is the main source for juice that’s not made from concentrate, a type that’s favored by consumers. Supply shortfalls will be hard to replace, said Judy Ganes, the president of J. Ganes Consulting.

Citrus greening disease continues to plague groves in the state, causing fruit to shrink and fall prematurely from trees or even kill plants. Producers have been applying therapies that mitigate the effects on yield.

The biggest reduction has been to the Valencia variety, the U.S. said in a report, adding that fruit size was “close to the minimum” and fruit droppage above average.

Orange juice’s rally may be limited because the higher prices could reduce demand. Consumers flocked back to the beverage during the pandemic, but that may be transitory. Over the long term, juice is in decline, Ganes said.

Florida’s crop has been traditionally used for juice, while California’s harvest is used for the fresh fruit market. For the better part of the last two decades, citrus-greening disease hurt groves and raised costs as well. Urban development has also contributed to the acreage shrinkage.