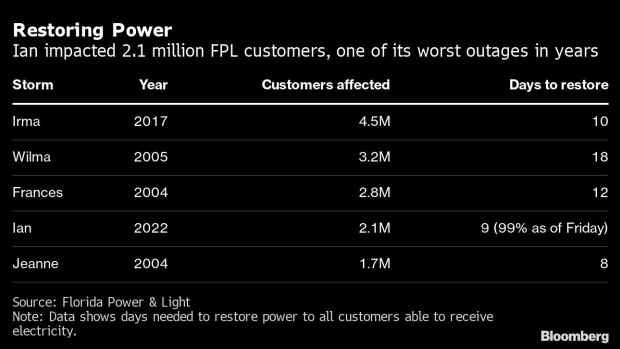 Florida Power & Light Co. (FPL) emergency response team workers following Hurricane Ian in Fort Myers, Florida, US, on Monday, Oct. 3, 2022. Florida cities looking to rebuild from the devastation of Hurricane Ian will be financing their efforts during the worst environment for municipal borrowing in more than a decade. , Bloomberg

(Bloomberg) -- Florida’s largest electric utility said it had restored service to 99% of customers blacked-out by Hurricane Ian and remained on track to reconnect the rest by late Friday.

Florida Power & Light, a subsidiary of NextEra Energy Inc., reported that 31,000 homes and businesses in its territory remained without power as of 4 p.m. Friday, down from 2.1 million in the storm’s immediate aftermath. However, “thousands” of homes and businesses have been so badly damaged that they can’t safely accept electricity service, FPL said in the statement. Statewide, more than 110,362 customer accounts still lack electricity nine days after Ian made landfall, according to PowerOutage.us, a website that tracks blackouts.

Most of the state’s remaining outages, about 74,200, lie in communities served by the Lee County Electric Cooperative, which covers the stretch of coast where Ian made landfall. The cooperative had pre-staged resources to begin restoration work from a Category 2 or 3 storm, which was predicted, rather than the much more powerful storm that came ashore, said spokeswoman Karen Ryan. With 150 mile (241 kilometer) per hour winds, Ian nearly ranked as a Category 5 hurricane and it severed the only bridges to islands served by the co-op.

FPL said Friday it would send 200 workers to help the co-op, as well as supply more than 500 poles and other electrical gear. FPL also will help arrange a barge to bring personnel and utility trucks to Pine and Sanibel Islands, which still can’t be reached by road.