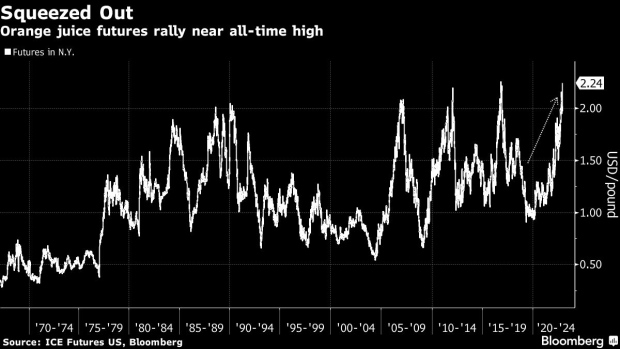 (Bloomberg) -- America’s top orange juice maker is set for a record decline in the crop this season, signaling that a global shortage of the breakfast beverage will only get worse.

Florida will likely produce 20 million boxes of oranges in the season that runs Oct. 2022 to Sept. 2023, down 51% from the year-ago period — the biggest drop in data going back to 1913, according to the US Department of Agriculture’s monthly World Agricultural Supply and Demand report, or WASDE. That would also be the smallest output since 1937. A box weighs 90 pounds (41 kilograms).

The decline follows damage from hurricanes, frost and bugs.

The shrinking of supply exacerbates global shortages, including in top-citrus grower Brazil, where output has been hobbled by adverse weather. Production in California, now the largest orange grower in the US and top fresh fruit supplier, was unchanged.

Florida’s crop has been decimated by citrus greening, a devastating crop disease that causes fruit to shrivel and fall prematurely and can cause a bitter taste. Earlier, Hurricane Ian and Tropical Storm Nicole devastated the crop, which the USDA accounted for the first time in its most recent estimate. The department previously noted that frost was a concern.

The shortage raises the cost outlook for beverage makers including Minute Maid owner Coca-Cola Co. and PAI Partners, which owns Tropicana, that could be passed onto American consumers at the breakfast table. Florida lawmakers sent a letter to House Appropriations Committee leaders seeking disaster relief funding for the state’s citrus industry.

“The loss from hurricanes is mostly recoverable, but the greater issue is disease,” said Judy Ganes, who runs J Ganes Consulting LLC and has tracked the citrus industry for more than three decades.

--With assistance from Alisa Parenti.

(Updates with letter from lawmakers in sixth paragraph)