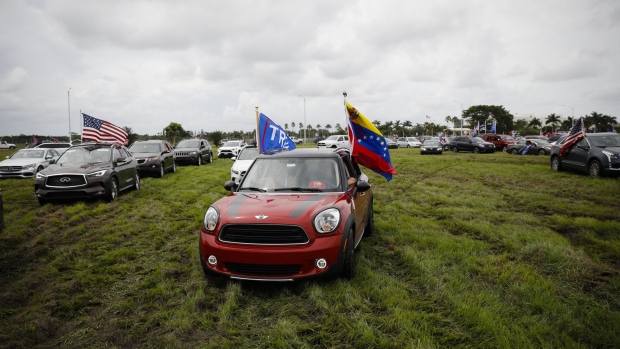 Venezuelans came to South Florida to put the troubled nation behind them. Preparing to cast the first votes of their new lives as American citizens, they’re faced with a wrenching decision: whether to support Donald Trump, the U.S. president who has been the most vocal against their former tormentors, despite having strongman qualities of his own. Many of them are.

Maria Paulina Camejo, a 29-year-old film student, emigrated to Miami in 2012 after the government of Hugo Chavez, the bombastic leader who began Venezuela’s so-called socialist revolution, expropriated her father’s bank and jailed him. She plans to vote for Trump because of his pro-business policies and attention to Venezuela’s crisis. She also worries about his behavior, which in recent days has included repeated refusals to commit to a peaceful transition of power.

“It’s not that I’m happy with my candidate,” Camejo said. “Many times I see him on television and it’s like watching Chavez: It’s crazy, but it’s entertaining.”

Venezuelan support is a small, new prize in Florida, a presidential battleground with 14 million votes up for grab that’s often decided by the slimmest of margins. About 238,000 Venezuelans live in the Sunshine State, and some 67,000 were naturalized citizens as of 2018, according the U.S. Census. A recent University of North Florida poll estimated that 55,000 of them are eligible voters -- and nearly 7 out of 10 support Trump over Democrat Joe Biden.

Republicans are trying to make them a reliably conservative constituency, like Cubans and Nicaraguans before them, and to use their energy to motivate those communities. This month, a pro-Trump caravan hundreds of cars long cruised the main drag of Doral, a Miami suburb known as Doralzuela, blaring a mix of country music and salsa. Supporters waved Cuban, Nicaraguan and Venezuelan flags from the backs of pickups.

Still, this election’s conflict reminds many Venezuelan first-time voters of what they fled. All Venezuelan-Americans who spoke agreed that they were still far better off in the U.S., but some said the promise of democracy was fragile.

“What curse has befallen on us Venezuelans?” asked Daniel di Geronimo, 29, a dual-national who’s a summer-camp project manager. He came to Miami from Caracas in 2017.

In 1998, Chavez, a charismatic former army colonel, was elected on an outsider platform promising to redistribute Venezuela’s oil riches. Under his regime, the country pulled further apart and became more corrupt. He stacked courts and ministries with party faithful, abolished term limits and spoke of ruling until 2030.

But he died in 2013, not long before commodity prices crashed and the Venezuelan economy unraveled. After years of unchecked spending and attacks on private business, his successor Nicolas Maduro has relied on force to stay in power.

While public corruption in the U.S. and the erosion of its institutions pale in comparison to Venezuela, they have gotten notably worse, said Michael Coppedge, a political scientist who’s one of the principal investigators of Varieties for Democracy, or V-Dem, an initiative that quantifies the health of representative governments.

“The U.S. has moved in that direction, in some respects, significantly,” he said.

This year’s V-Dem report, which surveys thousands of experts to gauge their countries’ democracies, said the U.S. is “suffering from substantial autocratization.”

Trump, a real-estate mogul, came to the White House pledging to “drain the swamp,” yet his businesses have benefited from his presidency and official visits. Many confidants have been arrested or are under investigation, including his former campaign chairman, Paul Manafort, and personal lawyer Michael Cohen. He has spoken of staying in office beyond eight years, and on Wednesday refused to commit to a peaceful transition if he doubts the election’s results.

“We’re going to have to see what happens,” Trump said, repeating an unsubstantiated claim that mail-in ballots are fraudulent. “Get rid of the ballots and you’ll have a transfer -- a very peaceful, there won’t be a transfer, frankly. They’ll be a continuation.”

In 2018, Maduro won another six-year term in an election widely condemned as rigged. Since then, Trump made ousting him a centerpiece of his foreign policy by levying sanctions on the regime and its closest ally, Cuba. Maduro remains in power even as Venezuela’s slide continues, but the measures have helped Trump make inroads in and around Miami, home to the U.S.’s largest Venezuelan population.

Di Geronimo said that after enduring rampant food shortages in Venezuela, he sees America’s troubles as relative, even in a pandemic year. And he said choosing Biden would be a gamble. “At least I know Trump,” he said.

Polls suggest the Florida race is close. A Washington Post-ABC News poll out Wednesday showed Biden underperforming with Latino voters, a key Democratic bloc, compared with Hillary Clinton when she lost Florida in 2016 by about 1%.

Biden has called Maduro a dictator, but criticized the U.S. drive for regime change. He has also pledged to grant Venezuelans Temporary Protected Status, which would allow them to stay in the country.

The Florida race has turned toxic, with both sides spending millions on ads aimed at swaying Latinos. Spanish-language campaign ads claim Trump is a despot in the same mold as Chavez and Maduro; Biden is cast as an extremist who will turn the country into a socialist dystopia. Facebook and WhatsApp groups are flooded with conspiracies and vitriol.

Carol Andressen, a 48-year-old beautician from the Andean city of Merida, moved to the Miami suburbs in 2003 after thousands of oil workers went on strike to demand new presidential elections and were fired. The divisiveness of the U.S. presidential race worries her.

“Venezuelans who don’t like Trump are afraid to say it publicly because of the things they lived through back home,” said Andressen, who supports Biden. “Many are scared.”

Democrats have been working to increase their presence in Venezuelan enclaves and other of Florida’s manifold Latino communities.

This month, Senator Kamala Harris, Biden’s running mate, made a stop to eat arepas in Doral. Biden visited the Puerto Rican bastion of Kissimmee, where he was introduced by Grammy-winner Luis Fonsi. Billionaire Michael Bloomberg said he plans to spend at least $100 million in Florida to help Biden’s election efforts, particularly with Latinos. (Bloomberg is the founder and majority owner of Bloomberg LP, the parent company of Bloomberg News.)

But many have already made up their minds. Gabriela Quintana, 25, who works in e-commerce and moved to Doral 13 years ago, said she was disappointed by Trump’s comments about women, but he had her support regardless of any misgivings.

“The city of Doral belongs to Trump,” Quintana said. “He is the only one who has done something for Venezuela.”

At the Trump caravan, many said they feared Biden would turn the U.S. into a communist country.

Elenora Froster, 49, an executive assistant who moved to Miami Lakes seven years ago from Caracas, said such widespread falsehoods were evidence Democrats had already lost her community.

“They repeat like parrots, like when Chavez spoke of ‘savage capitalism,’” said Froster, who supports Biden. “Trump is going to win, and it leaves me deeply disillusioned with North American society. I thought it was different.”