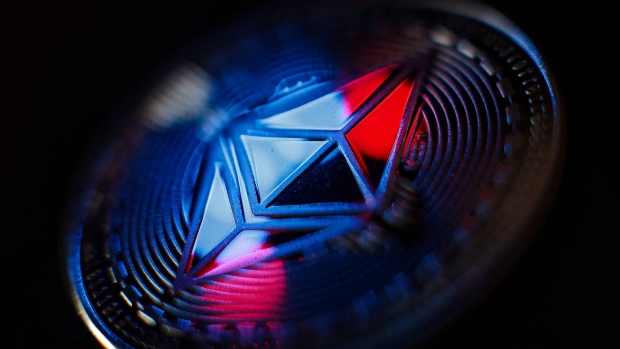 (Bloomberg) -- The contagion that spread from the implosion of the Terra cryptocurrency ecosystem to Celsius Network and Three Arrows Capital bears similarities to the 2008 global financial crisis.

A new report by blockchain data analytics firm Nansen found that the impact of the collapse of Terra’s algorithmic stablecoin TerraUSD in May can be determined by tracking stETH, a token that became a popular collateral asset for lending and borrowing in decentralized finance.

It’s a ripple effect similar to what happened during the Great Recession, when the financial system fell into turmoil as hedge funds and investment banks were forced to unwind leverage and sell assets as Wall Street rushed to shore up its capital positions.

Celsius and Three Arrows were major holders of stETH, which represents staked Ether on the Ethereum blockchain, according to the report released on Wednesday. Three Arrows was reported to have been ordered this week to liquidate.

While Nansen’s analysis shows that Celsius and Three Arrows were not the top sellers of stETH initially, as the overall crypto market crashed both entities and potentially others became forced sellers of stETH tokens, which were already relatively illiquid on their main trading venue Curve Finance.

Celsius and Three Arrows did not reply to a request for comment for this story.

Before Terra’s meltdown in May, stETH was turned into bETH, or bonded Ether, on the Terra blockchain to earn rewards paid in TerraUSD. And as TerraUSD started to fail to keep its peg to the US dollar, many depositors of bETH turned it back to stETH and then traded that for traditional Ether, according to Nansen’s report.

“Due to the market condition after a collapse of a top ecosystem, people were de-risking by selling stETH into Ether,” said Daniel Khoo, analyst at Nansen. The selloff led to the worsened discount of stETH’s price to Ether’s.

As a version of Ether, the second-largest cryptocurrency, stETH was launched by decentralized app Lido Finance in late 2020 as a solution to Ether staking, which is a way for investors to lock up the tokens and earn rewards ahead of Ethereum’s Merge, an upgrade to the network.

Nansen’s report said many entities used stETH as collateral on DeFi lending project Aave to borrow more Ether and then stake it with Lido in exchange for even more stETH -- which increased the risk of liquidations in the recent market turmoil.

“As the market situation got worse and the entities holding [stETH] having internal problems, such as insolvency, many institutions unwinded their leverage positions and also withdrew their liquidity,” Khoo said.

Chitra said prior to the crypto downturn, stETH traded in lockstep with Ether because it can be redeemed 1-to-1 for that token sometime after the Merge, which is expected to take place in the second half of this year.

The Nansen analysis also highlighted the opaqueness of centralized players.

Between June 8 and 9, digital wallets labeled as belonging to Celsius withdrew a total of 50,000 stETH from Aave that eventually made it to crypto exchange FTX. The large amount of stETH likely was sold through an over-the-counter deal, according to Nansen. The crypto lender announced the pause of all withdrawals, swap and transfer activities on its platform on June 12.

“Often, users of such platforms are not aware of where their funds ultimately end up and, in some cases, have no control over their funds in case something goes wrong, see many platform pausing withdrawals, for instance,” Nansen wrote in the report.