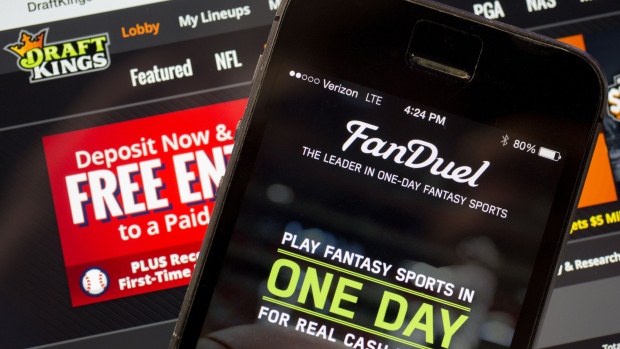 The FanDuel Inc. app and DraftKings Inc. website are arranged for a photograph in Washington, D.C., U.S. , Bloomberg

Flutter Entertainment Plc said it’s buying Fastball Holdings LLC’s stake in FanDuel for US$4.2 billion to get almost full ownership of the fast-growing U.S. bookmaker. Flutter shares rose as much as 14 per cent to a record high.

Flutter will pay US$2.09 billion in cash and issue about 11.7 million new Flutter ordinary shares to Fastball under the conditional agreement, taking its stake in FanDuel to 95 from 57.8 per cent, it said Thursday in a statement. The deal gives FanDuel an estimated enterprise value of US$11.2 billion.

Deals have been spurred by the legalization of sports betting in the U.S. in 2018 -- the latest being U.S. casino operator Caesars Entertainment Inc.’s acquisition of Britain’s William Hill Plc.

Competition is intensifying as companies such as BetMGM and Barstool Sports compete with FanDuel and its main rival DraftKings to capture surging demand.

The acquisition from Fastball “leaves Flutter with 95 per cent of its prize asset, and clears up uncertainty that has overhung the shares,” Jefferies analyst James Wheatcroft said in a note.

The Stars takeover gave Flutter ownership of Fox Bet, a Stars unit that has an exclusive license to use trademarks of Rupert Murdoch’s Fox Corp. for up to 25 years and spends money on Fox advertising.

That commercial partnership brought Fox a stake of 4.99 per cent in Stars, plus an option to acquire half of Stars’ U.S. operations. Fox now has 2.6 per cent of Flutter’s equity, and said it will take part in the capital raising announced Thursday to maintain its stake in the Irish company.

“The first person I rang to tell about this deal on a confidential basis was Lachlan Murdoch,” the CEO of Fox, Jackson said. “Fox are an incredibly important media partner.”

--With assistance from Ruth David.