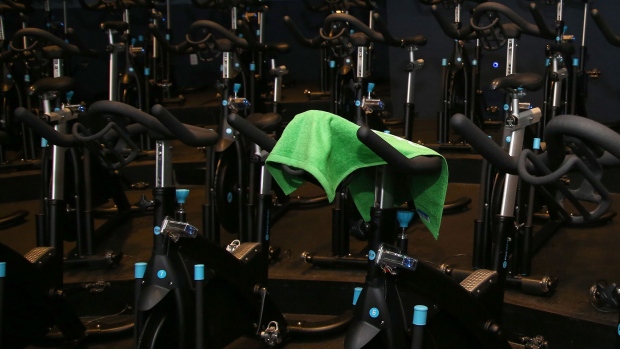 (Bloomberg) -- Flywheel Sports Inc., the operator of spin boutiques beloved by fitness-obsessed city dwellers, filed for bankruptcy with plans to go out of business after the coronavirus shut down its studios.

The fitness chain’s Chapter 7 petition filed in New York late Monday estimates as much as $100 million in liabilities and no more than $50 million in assets. Flywheel will use the court-supervised process to gather and sell assets so it can pay off debts and close its locations.

Both chains are among fitness centers that suffered after shelter-at-home policies in virus-hit regions kept their locations closed. Gold’s Gym International Inc. sought court protection from its creditors in May, followed by 24 Hour Fitness Worldwide Inc.’s bankruptcy in June.

New York and New Jersey recently allowed certain gyms to reopen at limited capacity. But New York City Mayor Bill De Blasio has expressed safety concerns over reopening and some local officials opted to extend a ban on indoor classes, hindering efforts by smaller boutique chains to return even on a partial basis.

Before the pandemic, Town Sports was looking to buy Flywheel’s spin studios to gain potential new business and financing. Combining the two fitness companies would have given NYSC’s approximately 600,000 members access to Flywheel’s cycling studios as part of a premium package.

Town Sports and Flywheel terminated their plan in April amid the shutdown. Flywheel, known for its high-intensity indoor cycling classes with around 300,000 members at the time of the proposed transaction, was taken over by creditor Kennedy Lewis Investment Management last year. The investment firm is also a major debt holder in Town Sports bankruptcy case, filings show.

Started in 2010 by Ruth Zukerman, one of the founders of SoulCycle, Flywheel emerged as a darling of the Manhattan boutique fitness scene. The company later focused on expanding into the at-home bike business in competition with Peloton Interactive Inc.