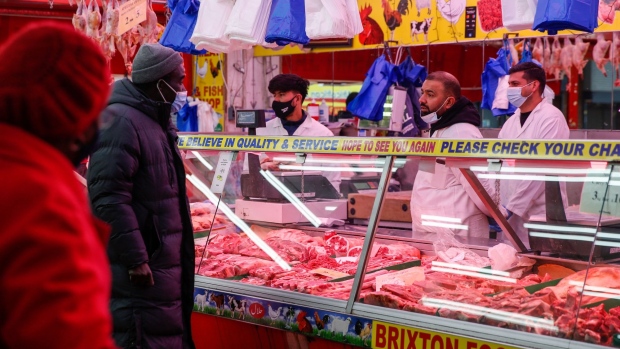 Workers serve customers at the butcher counter inside Brixton Foods meat and fish shop at Brixton Market in London, U.K., on Wednesday, April 7, 2021. British voters' attitudes are hardening against the European Union in the wake of the clashes between London and Brussels over coronavirus vaccines that have marked the 100 days since the U.K. completed its divorce from the bloc. Photographer: Hollie Adams/Bloomberg , Bloomberg

The final easing of pandemic restrictions this month has been overshadowed by a surge in people being “pinged” by the National Health Service Covid tracing app and told to self-isolate, amid a new wave of infections across the country. This has disrupted key parts of the economy such as transport services and food production, with some supermarkets already facing shortages.

In response, the government said it will allow certain workers to be exempt from the 10-day isolation rule. But there was widespread confusion across the food supply and related industries on Friday about which workers are eligible and how the plan is meant to work.

“Anger levels are pretty high,” said Shane Brennan, chief executive officer of the Cold Chain Federation, which represents companies in the temperature-controlled logistics industry. “This has been the worst week for government communication with the food industry since the start of the pandemic.”

For the food sector, the government identified about 500 key sites where daily coronavirus testing of as many as 10,000 workers will take place. Staff who receive a negative result will be allowed to continue working, even if they have been told by the NHS tracing app to self-isolate.

Food factories have been kept in the dark and have been told they’ll only get more information on Monday, said Nick Allen, chief executive of the British Meat Processors Association. That means pressure will continue to build in the system, because the number of people told to self-isolate will rise further in the meantime. “This is a 24/7 supply chain,” he said.

Separately, the government also published a list of critical sectors in England -- including energy, waste, water, border control and emergency services -- that will be able to replace self-isolation with daily testing for a limited number of workers who are double-vaccinated.

Companies will have had to have received a letter from the government which names the individuals the exemption will apply to. The program will run until Aug. 16, after which the government is planning to exempt everyone who has had both vaccine doses from having to isolate after a Covid contact.

Yet there’s growing pressure from within Johnson’s Conservative Party to overhaul the isolation rules. Lockdown-skeptic Tory member of Parliament Mark Harper said the Aug. 16 plan should be implemented immediately, while former Health Secretary Jeremy Hunt said Thursday fully vaccinated people should only have to isolate until they receive a negative PCR test.

Ranjit Singh Boparan, who is known as the ‘Chicken King’ due to his dominance of the poultry market, accused ministers of “sticking their heads in the sand” over a crisis caused by a “perfect storm” of isolating workers exacerbating a Brexit-driven labor shortfall. The 2 Sisters Food Group founder said the U.K. is at risk of its most serious food shortages in more than 75 years.

“We walk a tightrope every week at the moment,” Boparan said in a statement. “We’re just about coping, but I can see if no support is forthcoming -- and urgently -- from government, then shelves will be empty, food waste will rocket simply because it cannot be processed, or delivered, and the shortages we saw last year will be peanuts in comparison to what could come.”