The jump in global food prices to a decade high risks leading to even more expensive grocery bills, and the energy crisis is threatening to make things even worse.

Harvest setbacks, strong demand and supply chain disruptions have sent a United Nations index of food costs up by a third over the past year. The latest leg up last month came as prices for almost all types of foodstuffs gained, adding to inflationary headaches for consumers and central banks.

Soaring energy bills are now adding to the problem, escalating costs of producing fertilizers and transporting goods around the world, and making the run-up more reminiscent of the price spikes seen during food crises in 2008 and 2011. The energy rally could also prompt more crops to be diverted from food to making biofuels, the UN warned.

“It’s this combination of things that’s beginning to get very worrying,” Abdolreza Abbassian, senior economist at the UN’s Food and Agriculture Organization, said by phone. “It’s not just the isolated food-price numbers, but all of them together. I don’t think anyone two or three months ago was expecting the energy prices to get this strong.” 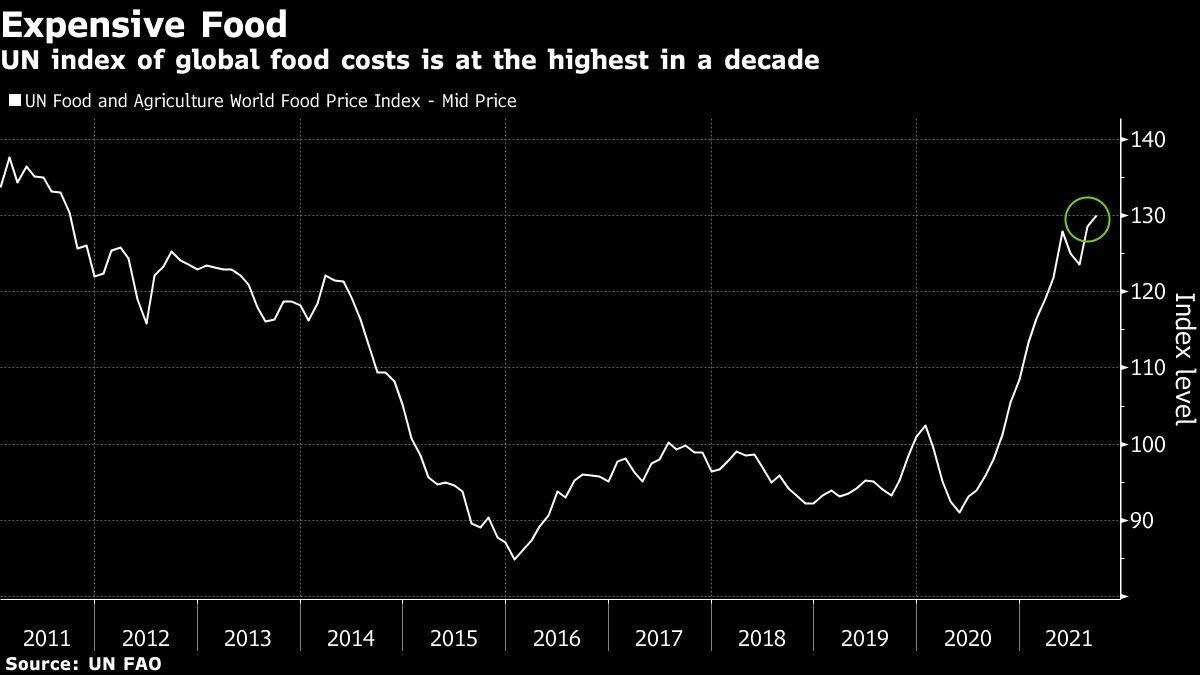 While it’ll take time for the latest increase in agricultural markets to filter through to grocery stores, consumers around the world have already been hit by higher prices, spurring governments to look for solutions to keep costs in check. Plus, rising freight costs and worker shortages along the supply chain have left supermarket shelves in countries like the U.K. short of items.

That’s as the world is contending with its worst hunger crisis in at least 15 years. Lofty food prices are particularly bad news for poorer nations that are dependent on imports, and can increase the risk of political instability.

The recent surge in energy costs is sending prices for farm inputs like fertilizer soaring -- threatening higher crop prices or possibly smaller supplies down the line -- and spurring greenhouses growing vegetables to go dark. That’s complicating the situation for growers who are already planting for next year’s harvests, according to Abbassian.

“It will be quite a jittery market for some time,” he said.

Bad weather in key shippers has pushed benchmark wheat futures to near an eight-year high in Chicago. North American and Russian farms were hit by drought, while the European Union had too much rain during harvest, curbing grain quality and leaving less supply suitable for bread-baking. Moscow has also taxed crop exports to safeguard domestic supply and cool food inflation.

That’s boosting bills for major buyers. In top wheat importer Egypt, the average cost in tenders is up almost US$100 a ton since purchases for this season began, and the president has called for an increase in subsidized bread prices. Other nations have issued a raft of wheat-import tenders lately, too.

“Among major cereals, wheat will be the focus in the coming weeks as demand need to be tested against fast rising prices,” Abbassian said in a report.