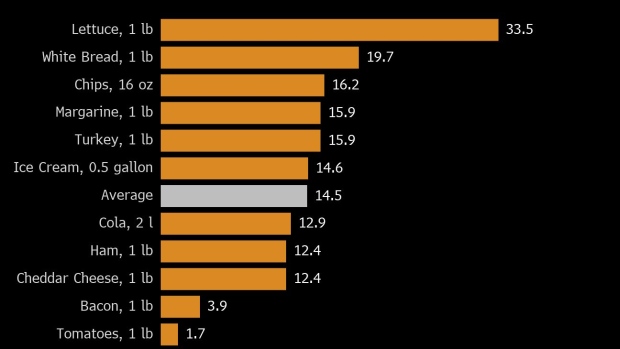 (Bloomberg) -- The cost of preparing a classic lunch at an American diner has shot up by almost 13% in a year.

To track inflation’s effect on a beloved menu choice, Bloomberg created an American Diner Index that includes ingredients for the toothpicked club sandwich, as well as the accompanying potato chips, ice cream and soda. Although restaurant owners don't necessarily pass all rising expenses onto their customers, the gauge provides an insight into how much more expensive it's become to assemble a basic meal.

Prices for lettuce and bread have surged 33% and 20% in the past year, respectively, contributing to the surge in the index, which is based on consumer-price data published monthly by the US Bureau of Labor Statistics. Two other key ingredients in the club sandwich, turkey and ham, also soared by more than 10%. And a half gallon of ice cream now costs about $5.64, up from $4.92 a year ago.

The burden is likely falling more on restaurant owners who are concerned that raising prices may lose them customers.

Indeed, some regulars of the small Hot Dog Shoppe chain in the Youngstown, Ohio area groused about having to pay even a few pennies more for their favorites, said owner Greg Vojnovic. When he nudged up the price of his chili dog by two pennies to $1.19, “some people complained bitterly about it,” he said.

He ultimately was forced to raise the price to its current $1.39. “Our customer’s the Dunkin’ customer, not the Starbucks customer,” he said. “And they’re feeling it.”

Romaine lettuce has had the biggest yearly jump overall in the lunch index, likely because of cutbacks in planting by US farmers wary of unpredictable consumer demand. Turkey and ham are up by 16% and 12%, respectively.

To attract cash-strapped customers, Denny’s Corp., one of the biggest diner chains in the US, introduced value-oriented menu items, the company said on its second-quarter earnings call last month. That included a $6.99 “endless breakfast” promotion with unlimited pancakes, eggs and hash browns.

Low-income consumers cut back their restaurant purchases noticeably in the first half, but some fast-casual chains reported stronger spending by higher-income patrons in the second quarter, said Bloomberg Intelligence restaurant analyst Michael Halen. Those customers may have traded down from higher-end restaurants.

“We're very curious to see what the third quarter has in store, to see if the pullback by low-income consumers has expanded to the middle class,” Halen said.

At the Hot Dog Shoppe, a case of potatoes doubled in price to about $30 before dropping a few dollars just recently. And, after he boosted his breakfast prices to cope with the soaring price of eggs and bacon, so many customers stayed away that he may be losing money in the mornings, Vojnovic said.

Still, food costs are only part of the problem. Just getting utensils lately can be a hassle.

The other day, Vojnovic said, “I was talking with my guests, and a guy looked at me and said, ‘What’ s up with the plastic spoon?’ Because we couldn’t get metal.”