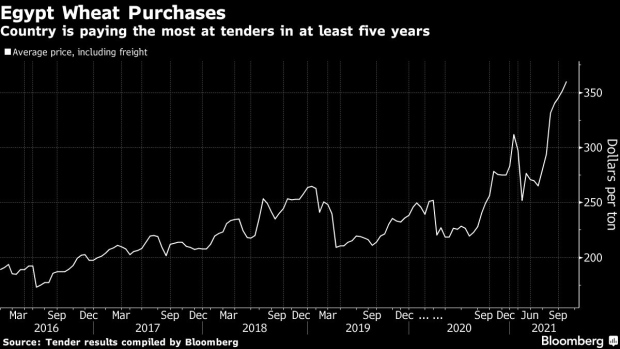 (Bloomberg) -- North Africa, one of the world’s biggest grain importers, is increasingly feeling the impact of higher food costs on grocery bills.

Egypt is hiking subsidized vegetable oil prices by almost 20%, and reiterated that higher bread costs are coming. Tunisia doesn’t expect any relief in prices of the wheat it imports to make semolina and pasta until next year’s harvest. And Algeria blamed global markets for more expensive food at home, vowing to boost its grains harvest in the next three years to become less dependent on imports.

The comments from the nations on Thursday highlight how rising costs are becoming more of a problem for officials in the region, where many people rely on subsidized food. Global prices are at a decade high after bad weather hit crops, labor shortages stifled supplies and freight costs rose. Peaks in 2008 and 2011 are linked with food riots and, in tandem with broader inequity, unrest in areas including North Africa.

The price hikes also come at a time when many North African economies are struggling. Tunisia, mired in political upheaval, is facing its worst economic challenge in over a decade, while Algeria is trying to cut spending and hold off a further drop in foreign reserves, which have fallen sharply in recent years.

In neighboring Morocco, the government approved the suspension of an import tax on durum and soft wheat, a move that will appease millers and bakers after the global surge in prices forced them to raise prices. While unveiling a budget bill for next year, the government dodged questions about plans for subsidy reform.

Egypt, the world’s top wheat importer, is paying the most in at least five years for the cargoes it books in wheat tenders, and was unsuccessful in drawing lower prices after canceling a tender earlier this month. Algeria also suffered a drought that curbed crop output, though its agriculture minister this month said supplies are plentiful and blamed speculators for a spike in foodstuff prices.