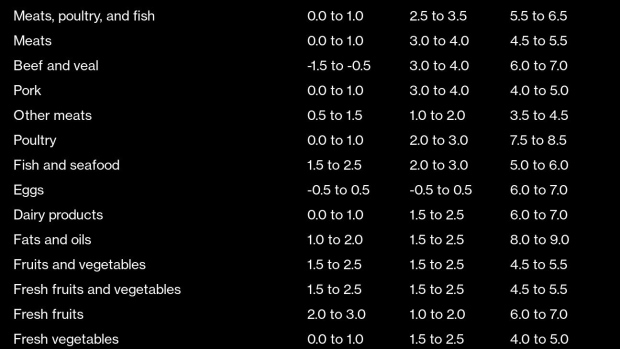 A worker handles wheat grain delivered to the Big Mills of The South flour milling facility in Chouf, Lebanon, on Tuesday, March 29, 2022. Already gummed up by supply-chain bottlenecks, skyrocketing freight rates and weather events, markets are bracing for more upheavals as deliveries from Ukraine and Russia which together account for about a quarter of the worlds grains trade turn increasingly complicated and raise the specter of food shortages. , Photographer: Bloomberg/Bloomberg

The risk of a global food shortage presents a grave threat to millions of people across the developing world. Much less critical but also important are the longer term environmental obstacles such a calamity may pose for sustainability.

For analysts at Bank of America Corp., the record surge in food prices vividly illustrates the risks at the intersection of environmental and societal crises. And the impact is huge, ranging across agriculture and food retailers to wholesalers, hospitality and gaming companies and even telecommunications providers.

Not only are rising food prices adding to concerns about poverty, hunger and political instability, they’re shining a light on the climate crisis as more than one-third of greenhouse gas emissions are tied to the production, distribution and consumption of food. Feeding the world while moving toward sustainable practices was already hard enough. The Kremlin’s aggression has suddenly made a bad situation much worse.

For investors, the risks are pervasive, said Kay Hope, London-based head of ESG for global fixed-income research at Bank of America. In the short term, Russia’s war on Ukraine caused food prices to climb more than 36% year-on-year in March. While that increase may take a few months to filter through to the consumer, it’s likely to weigh on the broader financial markets, she said.

Read more: The Worst Way to Respond to a Global Food Crisis

Russia and Ukraine are responsible for about 25% of the world’s wheat exports, 65% of sunflower oil, 20% of barley and 18% of corn. Wheat prices are hovering at record highs this week, rising further Monday after India decided to restrict exports, which further exposed just how tight global supplies are because of Vladimir Putin’s war.

And there are concerns about the fertilizer market, too, Hope said. Sanctions against Russia and its ally Belarus, plus fallout from the destruction inside Ukraine, will almost certainly reduce the availability of fertilizer, as those nations account for a large chunk of global supplies.

Put this all together and it’s not hard to see how grain market disruptions might ultimately lead to worldwide food shortages.

“In the UK, we’re already limited in how much vegetable oil we can buy at the supermarket,” Hope said. “That’s an alarming prospect for what may lie ahead for nations everywhere.”

Separately, US Treasury Secretary Janet Yellen and Bank of England Governor Andrew Bailey talked about the food crisis Monday. Yellen said Russia’s latest invasion of Ukraine has created a global crisis by exacerbating food security issues, while Bailey warned that a surge in food costs could have “apocalyptic” consequences for the poorest people in society and the global economy.

“That is a major worry, not just for this country, but for the developing world,” Bailey said.

In the US, the Department of Agriculture estimated as recently as last month that food prices may rise 5% to 6% this year—at least double the earlier forecast of about 2.5%.

Over the longer term, climate change and its impact on food supplies is a huge worry, not only for the emerging markets but for developed markets as well. As the world gets warmer, it will become more difficult to grow enough food and ensure that it gets to enough places to feed a growing global population, Hope said.

The potential social consequences are enormous, as the world will have to feed as many as 10 billion people by 2050, up from 7.7 billion as recently as 2020. And fixing food security means addressing climate change, and that’s an enormous undertaking.

In a report entitled “Food Security: Environmental Meets Social,” Bank of America analysts said climate change will alter what can be grown and where, while also increasing extreme weather patterns and affecting the spread of pests and disease.

They added that about one-third of food produced annually is lost or wasted, and that discarded food accounts for about 8% to 10% of greenhouse gas emissions. Equally alarming is the fact that about one quarter of that wasted food could feed almost 900 million hungry people.