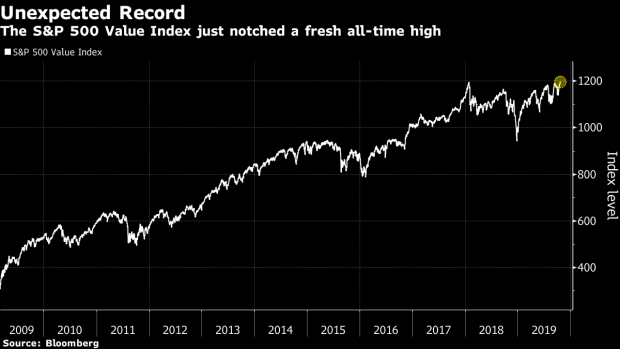 Pedestrians walk past the entrance to a subway station on Wall Street in New York, U.S., on Monday, Dec. 11, 2017. U.S. stocks were higher after an explosion rocked midtown Manhattan. The dollar fell and Treasuries rose. Photographer: Michael Nagle/Bloomberg , Bloomberg

(Bloomberg) -- Ask any Wall Street wag and he’ll tell you: the time-honored strategy known as value investing is in crisis.

But let’s not take the panic too far.

Yes, on a relative basis, the buy-cheap philosophy has been a loser, particularly to more voguish quant strategies when deployed in a hedge fund long-short portfolio. At the same time, very few things can really be said to have done badly in the current bull market. At least on an absolute basis, this group has enriched its owners.

To wit, the S&P 500 Value Index jumped Tuesday to an all-time high, bringing its total return since global markets bottomed in 2009 to over 400%. That’s behind the 492% rally in its growth counterpart, made up of companies seen with potential for faster sales or profits. Still, for anyone who have stayed invested, the returns are hard to frame as awful.

“The bull market did lift all boats and there are very few parts of the market that haven’t done well,” said Paul Nolte, a portfolio manager at Kingsview Asset Management in Chicago, which oversees $1.4 billion. “But it’s a matter of which has done less well and what’s done very well. And you want to try to match your strategy to the type of environment you’re in.”

Indeed, value stocks bucked the broad market decline Tuesday, rising 0.2% to surpass their record reached in January 2018. Energy shares, a key pillar, rallied 1.3% for the best performance in the S&P 500. Meanwhile, the benchmark gauge fell 0.4% to close below the 3,000 level as U.K. Prime Minister Boris Johnson lost a key vote to fast-track legislation for Brexit.

Part of the grievance stems from value’s persistent underperformance since 2017. Over the stretch, recession fears erupted periodically, crimping investor appetite for risk. In their thinking, cheap stocks are cheap for a reason, and if the economy weakens, value stocks are at danger of becoming traps. Growth is therefore favored, especially companies whose sales are perceived as resilient to economic cycles such as software makers.

That view has taken a big toll on a strategy that goes long the cheapest stocks and short the most expensive. It’s a trade that loses both ways as cheap stocks trail the market and the bets against over-valued stocks start to backfire. The damage can be viewed in the Dow Jones U.S. Thematic Market Neutral Value Index. The measure is down 5.5% this year, poised for its third annual loss.

But for long-only portfolios, value investing still yields decent gains, albeit smaller. There are signs that investor preference may be shifting. Tuesday marked the fourth-best day of the year for the cheap group as they beat growth stocks by 1.1 percentage points. It’s the fifth straight day of outperformance, the longest stretch since early September.

“Value vs. growth ratio is having its best breakout attempt in the last couple of years,” said Jonathan Krinsky, chief market technician at Bay Crest Partners. “And the case could be made that a real shift is underway. ”