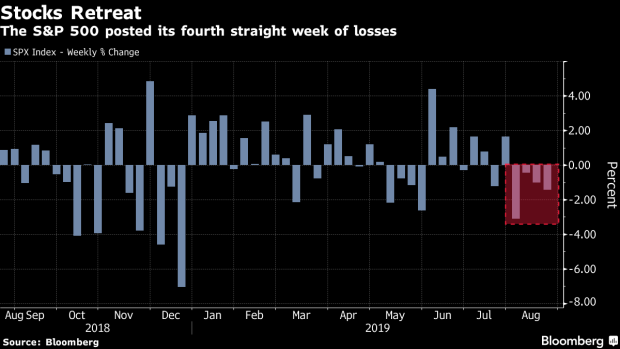 (Bloomberg) -- Donald Trump’s trying to win a trade war, so don’t talk to him about 600 points in the Dow Jones Industrial Average. But for traders coping with the price impact of his tirades, it’s all they want to talk about.

Days like Friday are creating stress in the trenches. A decade ago, Max Gokhman was a 24-year-old at the center of the storm, buying and selling toxifying credit contracts at a hedge fund he founded. Now head of asset allocation at Pacific Life Fund Advisors, he says those days barely compare when it comes to the unpredictability he’s facing daily.

“I used to tell people trading credit derivatives through 2008 was crazy, but this is way weirder,” said Gokhman. Back then, “the liquidity is what made it challenging to put on or take off your positions. Now every part of the market has its own idiosyncrasy, and at the top you have Trump, who can wreak havoc in really creative ways nobody’s thought of before.”

While the stakes were higher in the financial crisis, with global economies on the brink of a depression and unemployment surging, for people in markets it was mostly a one-way trade. The number of parts moving now presents a unique challenge, says Gokhman, with the Federal Reserve inciting hair-trigger swings in banks, bond yields and currency while earnings season knocks stocks like Target Corp. and Macy’s Inc. up and down 10% or 20% a day.

Maybe that would be fine if it weren’t for the president, whose Twitter blowups have gotten harder to navigate -- somehow -- as the summer dragged on. August is often a rough month for traders but this one has already seen the S&P swing at least 1% in nine out of 17 trading sessions, a record of volatility not seen since equities were crashing in December.

Turbulence showed no sign of abating heading into the week, with futures on the S&P 500 and Nasdaq 100 tumbling anew after the open in New York. It was the furthest thing from a restful Sunday for Donald Selkin, chief market strategist at Newbridge Securities Corp.

“I’ve been waiting all day. You anticipate these things. You had the feeling that things would go down because of the announcement of the latest increase in tariffs,” Selkin said. “All weekend long, you figured that they’d go lower -- the question was how much.”

Friday’s gyrations were a new chapter for many veterans, proof that no blueprint exists. After watching index futures get felled by China’s $75 billion tariff counter-punch, bulls were relieved to see Powell push them back to green with a needle-threading speech at Jackson Hole. Trump summarily lambasted the Fed for doing "NOTHING!," compared Powell with Xi Jinping and said he’d get back to everyone with a response. Wall Street had no recourse but to sit there as stocks slid almost 3% in the ensuing vacuum.

“If I tell you ‘I’m going to punch you,’ that’s not as bad as me telling you, ‘I’m going to hurt you in a way that I’m not even going to tell you about,”’ Steve Chiavarone, a fund manager with Federated Investors, said in an interview. "Hey, something bad’s coming, hold on."

These aren’t people who oppose everything Trump is doing. “We did need to resolve outstanding issues with China,” says Gokhman, though a coordinated approach with other countries that focused on intellectual property theft would’ve been preferable to a “sporadic” one that risks stymieing capital investment.

To Chiavarone, 35, it’s “absolutely a battle worth fighting.” A technological revolution is going on, “and the country that controls the intellectual capital that’s driving that revolution will very likely be the world’s preeminent power,” he said. Still, tactics matter, “and undoubtedly the ratcheting up of tariffs has a negative impact on earnings, sentiment and financial markets.”

In remarks to reporters Friday, Trump played down his impact on markets this month, pointing to the rally in stocks since he took office -- 49% in the Dow average on a total-return basis. “We’re at 25,000, so don’t tell me about 600 points,” he said.

Equities are smartly up in 2019 and despite swings that lifted the Cboe Volatility Index average 40% in August versus July, the S&P 500 has fallen just 5.9% from its July 26 record. On the other hand, with Friday’s drop, it’s down four straight weeks and has slipped below the highest level of January 2018, meaning anyone who bought stocks during that month’s surge is nursing losses.

“Sentiment is sentiment and it can become a bit of a self fulfilling prophecy if it goes on long enough,” said Nathan Thooft, Manulife Asset Management’s head of global asset allocation. “Investors -- retail and professionals -- run the risk of getting whipsawed. And it certainly appears that they have been based on the quick back and forth moves of the market.”