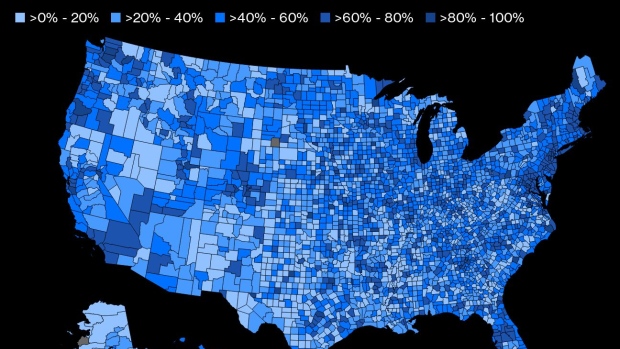 (Bloomberg Opinion) -- Last year was painful for many. Along with those who lost loved ones to Covid-19, perhaps no one felt that pain more than the essential worker, the low-income single parent, the isolated, the marginalized. Often they were the same person. Whether Black and poor in a densely populated city, or White and secluded in a rural area, large numbers of Americans who were already struggling before the pandemic came under even further strain. Adding to the distress, these people were deprived of a lifeline that allowed many of the rest of us to endure the lockdowns and limitations on our routines without undue difficulty: internet access.

Compared to health care and running water, internet connectivity may not seem so vital. But the pandemic showed why that thinking is wrong. Quarantined households have relied on laptops and tablets to stay connected to work, school and other humans — as well as file for unemployment, search for and apply to jobs, visit a virtual doctor appointment or schedule a Covid-19 test. Those who can’t connect are at a severe disadvantage. While the lucky ones treat the new year as a milestone — celebrating the end of 2020 through TikTok dances and Instagram memes — the virus and the economic gaps it blew wide open haven’t resolved just because the calendar changed. The story of kids without Wi-Fi doing homework from a Taco Bell parking lot that went viral in August shouldn’t be thought of as a snapshot in time, but rather a constant.

When Joe Biden takes office as president later this month, the four policy areas that he and his White House transition team have said they’ll prioritize are Covid-19, the economic recovery, racial equity and climate change. Tackling these interconnected yet discrete crises depends in part on ensuring that every American has access to high-speed internet. This is achievable, but it will require a high degree of collaboration between the public and private sectors as well as careful planning of resources — both of which are lacking from the U.S. government’s effort now. Biden has the opportunity to change that.

To begin with, officials actively working to close the so-called digital divide need to be able to answer this most fundamental question: Where is it? Determining precisely who in the country has internet and who doesn’t would greatly improve upon the scattershot approach employed thus far, but it’s still an unknown. Biden has already promised $20 billion for rural broadband infrastructure (and related job creation), and that’s a good thing; however, “rural” ignores half the problem, which is that plenty of urban dwellers don’t have affordable access, either.

The need for more accurate broadband mapping has been a continuing frustration for the industry and its regulators. The Federal Communications Commission estimates that 18 million people in the country don’t have broadband access, and yet almost no one believes that number to be correct. It relies on census-block-level data that by the FCC’s own admission is flawed. Even if just one household in a census block has internet, that counts. And even if an internet provider doesn’t offer service somewhere but says it “could” in the future, that counts, too. BroadbandNow dug into this discrepancy, and after checking service availability for more than 11,000 random addresses, it estimates that 42 million Americans don’t have a way to purchase broadband internet. That’s more than double the FCC’s count.

The cohort that probably has the best sense of the true picture are companies with which the government has a notoriously tenuous relationship: technology giants whose devices and software are ubiquitous. The Justice Department sued Google’s parent Alphabet Inc. last year over antitrust violations, while another lawsuit was brought by dozens of state attorneys general. Likewise, the Federal Trade Commission sued Facebook Inc., alleging that it, too, is an illegal monopoly. House lawmakers have also accused Amazon.com Inc. and Apple Inc., along with Google and Facebook, of anti-competitive behavior.

Data from Microsoft Corp. (which hasn’t found itself in the same regulatory crosshairs of late) has provided the most eye-opening look at the digital divide. Rather than access, Microsoft pulled anonymized data from its various consumer services — such as Windows, Office, Bing, MSN news, sports and weather — to study usage. As of November 2019, it found that about 157 million people in the U.S. weren’t using the internet at broadband speeds of 25 megabits per second. That’s roughly half the population.

Last year, Congress passed the Broadband Deployment Accuracy and Technological Availability (DATA) Act, requiring the FCC to collect more granular data to be able to make better funding decisions while calling for a crowdsourcing process that can challenge service providers’ claims. But that’s only the tip of what needs to be done. The urgency of the country’s broadband needs, especially during the pandemic, calls for appointing a czar dedicated to this mission, according Bhaskar Chakravorti, dean of global business at Tufts University’s Fletcher School and founder of its Digital Planet research initiative.

Blair Levin, who directed the writing of the 2010 National Broadband Plan for the FCC, agrees that someone needs to supervise the effort more directly. “For every problem there has to be someone who goes to bed thinking about the work and feeling like their professional reputation is on the line if good things don’t happen. I don’t know who that person is today,” said Levin, who is now policy adviser to New Street Research LLP.

The effectiveness of a digital czar or any such strategy may be helped by this week’s Senate runoff election in Georgia, where Democratic victories flipped the chamber, leaving fewer roadblocks to Biden’s policies. That said, internet access is largely a bipartisan issue, and red states have some of the biggest holes to fill. Alabama, Arkansas, Georgia, Louisiana, Mississippi, Missouri, New Mexico and Texas each had at least seven “internet desert counties” where more than half of residents don’t have broadband and at least 30% of families with school-age children live below the poverty line, according to a July report from BroadbandNow.

Individual states and tech and communications companies have their own projects aimed at getting more Americans online, and all of that helps. But a more collaborative approach utilizing technologies from a variety of industry sources would be better. The costly process of running a fiber-optic cable to every home in the U.S. is an impractical solution, according to Microsoft President and Chief Legal Officer Brad Smith. “That’s how you turn a $15 billion problem into an $80 billion problem,” he said. Microsoft’s Airband initiative uses television white space, the unused frequencies between channels, to transmit signals that travel far enough to cover spread-out rural communities. Other technologies include low-Earth-orbit satellites, which Amazon and Apple have invested in. Google also has fiber assets.

The political pressure on tech companies gives lawmakers and regulators unique leverage to make a harder push in these directions. While the concerns of tech overreach are legitimate, framed differently, there’s a substantial portion of the country for which those issues are beside the point because they don't have internet. “You’ve got these tech companies under a microscope right now, and each one has the capability to close a significant portion of the broadband gap in the U.S.,” Chakravorti said. “Start these conversations now.”

This is hardly a thorough list of what the next administration could do better — there’s also the chance to fix the shortcomings of federal subsidy programs such as Lifeline (that’s a story for another day). But ending digital inequity has the potential to be the most meaningful pursuit of the Biden White House, as it would ensure more equal access to education, employment, health care and ultimately, wealth. The process can be patchwork, but it needs to start with honest data showing the areas of biggest need and then not just reaching across the aisle, but across the entire tech landscape.