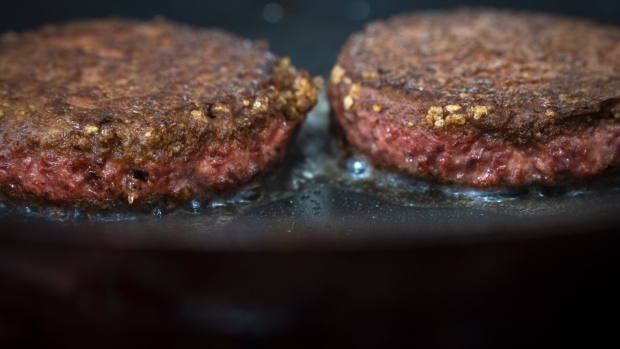 NEW YORK, NY - JUNE 13: In this photo illustration, two patties of Beyond Meat "The Beyond Burger" cook in a skillet, June 13, 2019 in the Brooklyn borough of New York City. Since going public in early May, Beyond Meat's stock has soared more than 450 percent and its market value is over $8 billion. Beyond Meat is a Los Angeles-based producer of plant-based meat substitutes, including vegan versions of burgers and sausages. (Photo Illustration by Drew Angerer/Getty Images) , Getty Images

(Bloomberg Opinion) -- Big food is salivating over fake meat after the blockbuster initial public offering of Beyond Meat Inc., the leading plant-based protein brand, in May.

Traditional producers have rushed into the booming market for meat substitutes, which threaten to take a slice of their business. Tyson Foods Inc. was an early investor in Beyond Meat, but sold its stake before the company’s trading debut and announced its own line of faux meat. Other U.S. companies, such as Smithfield Foods Inc., are introducing alternative protein products. European giants are getting in on the act too, with Nestle SA snapping up California-based Sweet Earth two years ago and Unilever NV buying The Vegetarian Butcher last year.

It’s a familiar playbook. The big drinks companies have bought craft brewers. Major cosmetics houses are blending more artisan scents into perfumes. But there’s one segment where the similarities – and potential pitfalls -- are striking: tobacco, which is trying to woo smokers with the products they describe as lower risk, such as electronic cigarettes.

Just as the tobacco industry has turned to vaping products to cope with high taxes and declining rates of smoking, big food sees a growing market for meat substitutes as people eat less animal protein and governments slap taxes on their other unhealthy products (and even consider levies on red meat).

But traditional food manufacturers eager for vegan profits may struggle with some of the same obstacles tobacco has faced with vaping: adoption and regulation.Just look at Japan. It’s the most developed nation for devices that heat, rather than burn, tobacco, accounting for about 25% of the market. While tech-savvy early adopters were quick to switch to the new devices, older generations were slower to follow suit.

Meat substitutes could see a similar trajectory. Analysts at Barclays Plc point out that men drive demand for meat. Convincing them –particularly older generations to switch -- will be crucial. Plant protein substitutes also tend to be more expensive. The premium will need to be whittled away for consumption to be widespread.

While there’s no suggestion that fake meat products cause harm in any way – as has been alleged in some cases with vaping –  not everyone agrees that they are healthier than animal protein. Chipotle Mexican Grill Inc. said it would not be stocking meat alternatives because they are too processed for the burrito chain. Beyond Meat has hit back at the claims, saying that its products and facilities are more transparent than those in the meat industry.

More importantly, faux meat manufacturers will need to keep innovating – and investing – to grow, just as tobacco companies have had to come up with ways to make electronic cigarettes more satisfying for smokers to encourage them to switch.

Plant-based protein producers will need to stay one step ahead of the competition with new ingredients, akin to how the market for milk substitutes expanded from soy to embrace soaring demand for nut and oat drinks. Beyond Meat and Nestle’s Sweet Earth use peas for their meatless dishes; Unilever’s The Vegetarian Butcher uses lupine beans to give some meals a fatty, nutty flavor. The possibilities are endless.

Yet with innovation comes the risk of alienating consumers and inviting regulation. The magic ingredient at Impossible Foods Inc. – the other big independent plant-based protein maker – is heme, which gives its burgers a bloody meat-like taste. The ingredient is genetically engineered. The U.S. Food and Drug Administration recently found heme to be safe as a color additive, paving the way for sales in supermarkets. But using a genetically-engineered ingredient could turn off the very ethical, health-customers Impossible wants to attract.

As big food courts vegans, it will confront pickier consumers than smokers-turned-vapers. Already some are worried about Burger King cooking the Impossible Whopper on the same grill as meat burgers, unless the customer asks for it to be prepared separately.

A bigger danger would be if any plant products were found to contain animal traces. Impossible recently partnered with meat processor OSI Group to add more manufacturing capacity and ease supply constraints. It has dedicated capacity at OSI’s facilities, and the production line is not shared with animal-derived products. But it’s a risky move, and one that traditional meat producers going vegan will also have to manage.

Like big tobacco, food manufacturers are already confronting challenges to the way they label products. States including Arkansas and Mississippi have banned companies from using the word “burgers” or “dogs” to describe plant-based alternatives. That’s a regulatory breeze compared the crackdown on vaping. In June, San Francisco became the first U.S. city to ban the sale of electronic cigarettes. But it’s still a headwind in what is a nascent industry.

While the path of big tobacco highlights some of the challenges facing plant-based protein, there’s one more appetizing similarity. Last year, Altria Group Inc., which owns Philip Morris, took a 35% stake in Juul Labs Inc., the U.S. market-share leader in electronic cigarettes, valuing the company at $38 billion. Beyond Meat is now valued at a staggering $9 billion, almost a third of what food giant Tyson is worth. Such lofty valuations reflect long-term consumer trends. But as the tobacco industry has learned from its foray into alternatives, big food producers shouldn’t assume fake meat is an easy recipe for success.