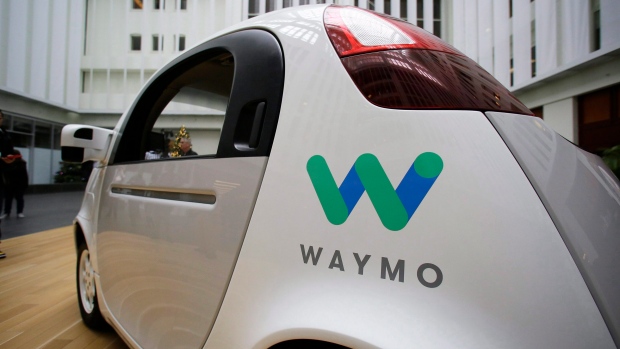 In this Tuesday, Dec. 13, 2016, file photo, the Waymo driverless car is displayed during a Google event in San Francisco. , AP Photo/Eric Risberg, File

On Monday, the companies faced off before a jury in San Francisco federal court over an alleged heist that has fascinated Silicon Valley from the moment Waymo filed its lawsuit last February.

“This case is about two competitors where one of the competitors decided they need to win at all costs, that losing was not an option,” Charles Verhoeven, Waymo’s lead lawyer, said in his opening argument. “In this case that meant taking trade secrets from a competitor.”

To win any of the US$1.9 billion in damages it seeks, Google’s self-driving unit also will have to demonstrate how its trade secrets are in Uber’s technology, details which have been obscured from public view. The courtroom will be closed when proprietary information is being discussed.

“A lot is going to depend on themes of conspiracy, but the rubber is finally going to meet the road for Waymo,” Michael Risch, a professor at Villanova University School of Law in Pennsylvania, said in an email. “Can they show trade secrets in Uber’s stuff or not? After a year of pretrial smoke, will they show a fire?”

Waymo claims Uber’s overreach was rooted in its inferior position in the nascent market for self-driving cars. The company alleges that former Uber Chief Executive Officer Travis Kalanick tried to bridge the gap by conspiring with Waymo engineer Anthony Levandowski, who then downloaded the trade secrets and funneled them to the ride-hailing company through an acquisition and, eventually, as head of Uber’s driverless program.

The jury will see comments from Kalanick that he wanted to lure Levandowski to Uber to get the benefit of “cheat codes” and “to leapfrog Google,” Verhoeven said.

“The evidence is going to show Mr. Kalanick is the one driving this, he’s the one who wanted to break the rules,” the lawyer argued.

Waymo plans to call its CEO, John Krafcik, as its first witness Monday, after opening arguments. It also plans to call Kalanick, who may not end up testifying until Tuesday or Wednesday.

Uber argues the alleged trade secrets aren’t secret at all. Rather, they are pieces of know-how that its driverless car engineers, some of them from Waymo, accumulated in the course of their careers, the ride-hailing company contends.

“There’s no conspiracy. There’s no cheating. Period. End of story,” Uber lawyer Bill Carmody told jurors in his opening argument. “Like most conspiracy stories it just doesn’t make sense when you get the whole story.”

Uber claims Waymo has failed to uncover any evidence of theft -- even after Uber permitted its adversary to inspect its LiDAR designs and facilities at least 11 times.

The San Francisco-based startup has also argued that its LiDAR designs -- the light radar technology at issue in the case, which self-driving cars rely on to sense surroundings and avoid obstacles -- are different from Waymo’s.