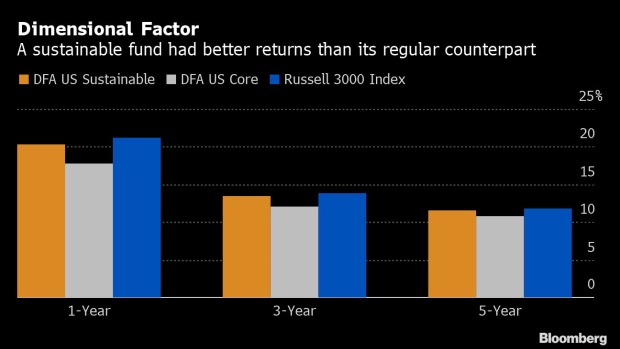 (Bloomberg) -- Investing in green mutual funds paid off last year as several top funds outperformed those without a sustainable focus. Over a longer period, the picture is more mixed.

A Bloomberg analysis of funds that have sustainable equivalents shows there’s neither a long-term edge nor a sacrifice for picking one strategy over the other.

“Most evidence is it’s a wash,” said Jon Hale, head of sustainability research at Morningstar Inc.. “There’s no underperformance but there’s no out-performance.”

The results demonstrate the quandary of investing with an environmental, social and governance focus: Is going green good for your portfolio? Below are comparisons of ESG and regular funds offered by Pacific Investment Management Co., Dimensional Fund Advisors and Nuveen.

In the three years since Pimco re-branded its Total Return ESG Fund under Scott Mather, its record has narrowly trailed the $68 billion regular Total Return Fund. That reversed in the last 12 months, with the ESG version returning 10.3% through January compared with 9.6% for the original fund.

Both versions track the Bloomberg Barclays U.S. Bond Aggregate Index and share similar macro characteristics reflecting Pimco’s view of factors such as the yield curve and interest rate risk, Mather said. The ESG version has a bigger allocation to investment grade credit and almost 30% is in green bonds compared with less than 2% in the original fund.

While going green was a good bet last year, that could change if opportunities arise for active trading in the oil sector, where the cost of capital -- and yields -- may rise faster than ESG debt.

“There might be a big snapback,” said Mather, co-manager of both funds.

To counter those exclusions, the social fund bulks up on other technology and finance names, with a 21% allocation to information technology and 15% to financials.

Dimensional constructs all of its funds by analyzing securities for company size, value and profitability. For sustainable funds, it adds an overlay that screens mostly for carbon emissions and fossil fuel reserves and also excludes tobacco and munitions producers -- without hurting relative performance.

“You have to be able to apply it in a way you don’t sacrifice expected returns,” Joseph Chi, Dimensional’s head of responsible investment, said. “We believe the way we’ve done our sustainability core does that.”

In many ways, the funds don’t look that different. The U.S. sustainability fund and its core peer have similar sector allocations, at least when it comes to their largest holdings. Both have more than 21% of their portfolios in information technology and count Apple Inc. as their largest stock.

But they diverge when it comes to energy stocks, which make up 5% of the core fund and less than 2% of the sustainability fund.

Similarly, the international sustainable fund has smaller exposure to energy, while companies such as BP Plc and Royal Dutch Shell PLC are among the top 10 holdings of its non-ESG peer.

To contact the reporter on this story: John Gittelsohn in Los Angeles at johngitt@bloomberg.net

To contact the editors responsible for this story: Sam Mamudi at smamudi@bloomberg.net, Alan Mirabella, Josh Friedman