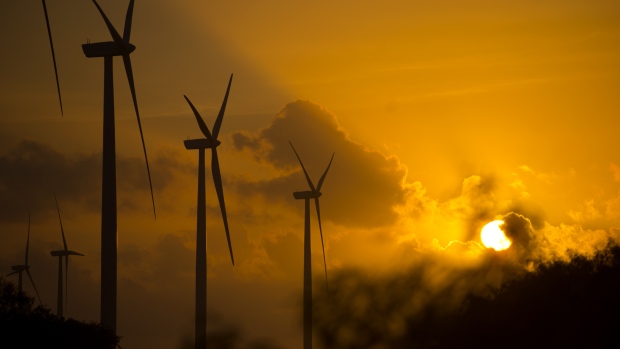 Wind turbines stand during sunset at the Avangrid Renewables' Baffin Wind Power Project in Sarita, Texas, U.S., on Wednesday, June 14, 2017. In the cut-throat Texas energy market, the construction of coastal wind turbines—some 900 in all—has had a profound impact. It's been terrific for consumers, helping further drive down electricity bills, but horrible for natural gas-fired generators. , Bloomberg

(Bloomberg) -- Wind power in Texas is about to blow past coal for the first time.

Turbines in the Lone Star State are forecast to generate 87 terawatt-hours of electricity in 2020, according to a report Thursday from Rystad Energy. That will exceed the roughly 84 terawatt-hours next year from coal plants.

The trend reflects the shifting dynamics of the U.S. power sector. Utilities are increasingly shunning coal because it’s a key driver of climate change, while costs for wind continue to slide. Wind will make up 10% of the country’s energy mix this year, and coal will slump to 23%, down from 44% a decade ago, according to Rystad. In Texas, which gets more power from wind than any other state, Vistra Energy Corp. closed more than 4 gigawatts of coal plants last year because they couldn’t compete with cheap natural gas and wind farms.

“Renewable energy technologies are reaching a level where new installations are not driven solely by policies or subsidies, but by economics,” Carlos Torres-Diaz, head of gas market research at the Oslo-based research company, said in a statement.

To contact the editors responsible for this story: Lynn Doan at ldoan6@bloomberg.net, Joe Ryan, Christine Buurma