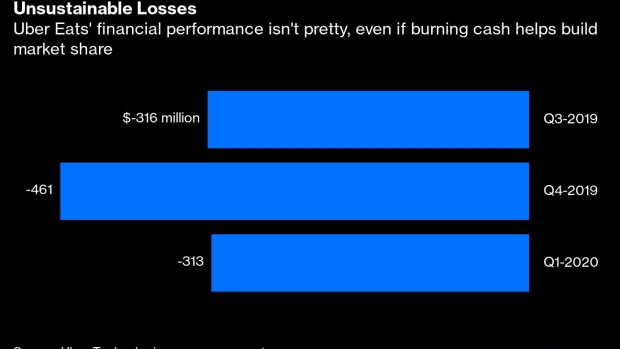 (Bloomberg Opinion) -- Uber Technologies Inc. needs to act fast to buttress its food-delivery business. It now has a second chance and shouldn’t blow it.

Late Monday, the New York Times reported that Uber Eats-parent Uber Technologies Inc. made an offer to acquire Postmates Inc., citing people familiar with the matter. A deal for Postmates would value the company at around $2.6 billion and could be announced next week or sooner, according to the Wall Street Journal. Reuters also reported on Monday that Postmates is considering an initial public offering as well.

This isn’t Uber’s first attempt at consolidation for its food-delivery unit. Earlier this year, the company was in serious negotiations to merge with Grubhub, but lost out in a bidding war to Just Eat Takeaway.com NV. The European competitor announced a deal to buy Grubhub for $7.3 billion in early June. While this second option isn’t as ideal as the first for Uber, it’s still worth trying, and for the same reason: A merger would improve profitability and help make Uber Eats viable.

As an industry in aggregate, Uber Eats and its three other U.S. food delivery competitors — DoorDash, Grubhub and Postmates — has been hemorrhaging cash as they compete against each other with lavish promotions and deals. Uber Eats alone lost more than $300 million in adjusted Ebitda, a measure of profitability, in its latest reported quarter, while Grubhub posted a $33 million loss for its first quarter.

If Uber can take a player out of the equation, it would help rationalize the level of discounting, thereby lowering losses. Further, an Uber Eats-Postmates merger will likely generate significant cost savings as any overlapping administrative expenses can be eliminated.

A Postmates acquisition also has the benefit that it would be more amenable on antitrust grounds. Some analysts have said worries over potential regulatory issues were part of what nixed the Uber Eats-Grubhub combination, which would have united two big players:

An Uber Eats deal with Postmates would boost the combined companies’ total market share to around 30%. It would still allow for a robust level of competition for much of the country and be less likely of an issue for regulators to block. So, while Grubhub would have been a better deal for Uber with its larger market power and higher potential for cost synergies, a deal with Postmates is better than the status quo. Plus, it comes at a lower purchase price as well.The clock is ticking. Uber’s status quo isn’t sustainable. Yes, the company has a strong balance sheet with $9 billion in cash as of the end of its last quarter, but it also lost more than a billion dollars in those three months, too. Even a big cash pile won’t last long, if it doesn’t get its losses under control. A deal with Postmates would help fix that.