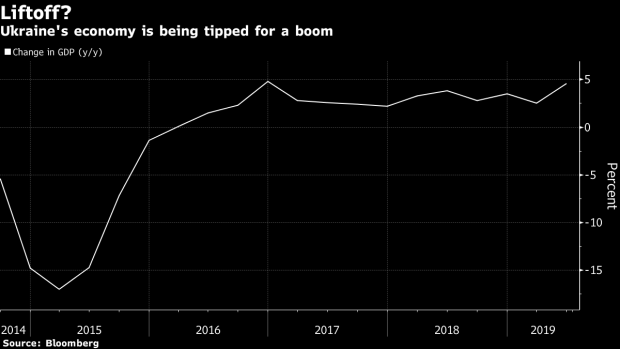 (Bloomberg) -- The backdrop hasn’t been this good for Ukraine’s economy in years.

That’s according to Dmytro Sologub, a deputy governor at the central bank. While revolution and war have taken a toll in recent years, he says the kind of issues that caused fragility in the past are now absent.

“There are no big holes in Ukraine’s economic foundations now,” Sologub said this month in an interview. “There was always something before -- a huge current-account gap, budget deficits, financial instability. But none of that’s here now.”

Second-quarter economic-growth data suggested an upswing could be imminent, and investors have made the hryvnia this year’s best performer against the dollar. Productivity is improving and the business climate, while maybe not much better, “definitely hasn’t got worsen,” Sologub said.

Despite some encouraging early signs, corruption remains Ukraine’s major challenge. He lists law enforcement, rule-of-law and the court system as areas in need of improvement.

To contact the editors responsible for this story: Andrea Dudik at adudik@bloomberg.net, Andrew Langley