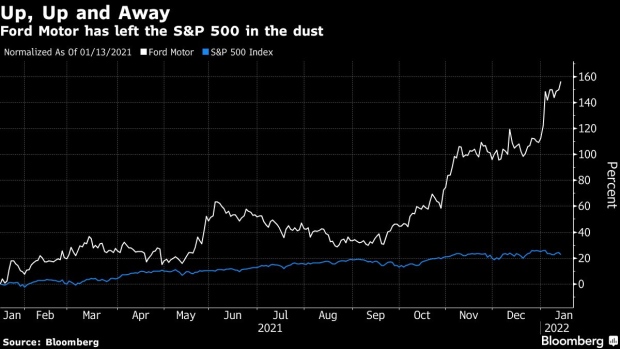 (Bloomberg) -- Ford Motor Co.’s rally to top $100 billion in market value places it in a odd group: that of companies that are worth less than what they generate in sales.

Ford market cap breached the $100 billion milestone earlier on Thursday after a rally pushed the stock to a 20-year high. Annual sales at the 118-year old automaker though have been already above that mark for three decades.

Only 92 other publicly traded companies are in the $100 billion club, and even fewer -- just CVS Health Corp., Walmart Inc. and Anthem Inc. -- currently trade at a valuation below their sales.

The Dearborn, Michigan-based car company has recently been fueled by a mania surrounding the future of electric vehicles and is up 160% over the past year. Newcomer Rivian Automotive Inc., is now valued at roughly $75 billion despite generating only about $1 million in sales.

With $135 billion in sales over the past year, Ford still has a ways to go before attaining a price-to-sales ratio of one. By comparison, the average $100 billion company trades for seven times its sales, led by Nvidia Corp., which currently trades for 27-times last year’s revenue, according to data compiled by Bloomberg.