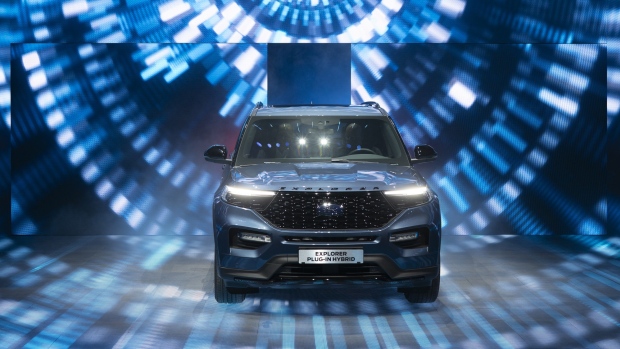 Ford Motor Co.’s Jim Hackett and Wall Street analysts started this year frustrated with one another. Sure, the automaker had been underperforming, but the chief executive appealed for time to show he was fixing things. He assured them the redesigned Explorer SUV rolling out months later would be a proof point.

But rather than help the earnings results Ford delivers this week, the Explorer will be a hindrance. Sales have plunged as a plant plagued by personnel problems has struggled to get the new sport utility vehicle out the door. Thousands have been shipped 270 miles away to another Ford factory for rework.

The botched Explorer launch puts Hackett back in the position he was early this year — testing the patience of investors. A downbeat assessment of how long it will take to turn the automaker around already cost the company an investment-grade credit rating. By pointing to the SUV as one of the first products he influenced, the CEO staked his reputation on it.

“From a design, styling and content standpoint, it hit the marks,” Jeff Schuster, a forecasting analyst for LMC Automotive, said of the Explorer. “But if you can’t get out of the gate, that certainly is going to put some question marks not only on his credibility, but from a consumer standpoint, on the vehicle itself.”

The transformation of Ford’s Chicago assembly plant was one of the most complex in the company’s history, a spokeswoman said. The company is shipping the new Explorer — the all-time best-selling SUV nameplate in the U.S. — to dealers now and performing additional quality inspections as needed, she said.

Ford probably will report on Wednesday that third-quarter profit slipped to 26 cents US a share, according to analysts’ estimates compiled by Bloomberg, down from 29 cents US a year ago. Automotive revenue is expected to dip to US$34.3 billion, from US$34.7 billion.

“This Explorer issue is going to be a big negative for the quarter,” said David Whiston, an analyst for Morningstar who rates Ford the equivalent of a buy. “It’s a viciously competitive market and you don’t want to be missing one of your big hitters.”

Ford shares have fallen 15 per cent since Hackett, 64, took over in May 2017. The stock slumped 37 per cent during the tenure of his predecessor, Mark Fields.

When Ford reported early this month that Explorer deliveries collapsed by almost half during the quarter, Mark LaNeve, the automaker’s U.S. sales chief, said dealers had adequate inventory to sell.

“Availability has improved dramatically over the last 30 to 45 days,” he said in an interview. “We’ll be able to hit our stride with Explorer starting now.”

Supply in showrooms may indeed be building up, but a batch of about 2,500 Explorers in need of repairs arrived recently at the company’s factory in Flat Rock, Michigan, which for weeks has been fixing and finishing vehicles shipped from the Chicago plant where the SUV is built, according to people familiar with the matter.

LaNeve told analysts on Oct. 2 that the Chicago plant had started shipping Explorers directly to dealers. But most of those models also have required repairs before they can be sold, said the people, who asked not to be identified describing internal issues the company is having.

And not all problems with Chicago-built SUVs are being fixed before they reach customers’ driveways. Consumer Reports had problems with the Lincoln Aviator — a mechanically similar model built alongside the Explorer — that the magazine’s testers purchased last month for US$63,400. The digital gauges that display speed, fuel consumption and other important information shake and flip, making them difficult to read.

“Ford does tend to struggle with the new introductions, especially if they’re a larger departure from the previous design,” said Jake Fisher, the magazine’s director of auto testing. “It could take a few years to get the bugs worked out.”

Ford is not experiencing similar setbacks as it begins building a redesigned version of its Escape compact SUV at its factory in Louisville, Kentucky. LaNeve told analysts the Escape “is a much more normal launch.”

Days after the January debut of the new Explorer — which hadn’t been redesigned in almost a decade — Hackett described Ford’s product product development as “constipated,” and said his executive team was fixing what ailed the company.

“The new Explorer and Ranger, which our administration kind of intercepted in process, are good examples of where we started to have influence,” said Hackett, who played football for Bo Schembechler in the 1970s at the University of Michigan.

What the CEO wasn’t counting on was for a problematic plant to cause trouble again. The Chicago factory, fined twice in the last two decades by federal workplace-harassment regulators, is riven with dissension that’s hampering productivity and quality, according to people familiar with the situation.

Roving groups of workers are intimidating other employees, creating a hostile environment, the people said. That’s driving up turnover and leaving some vehicle assembly unfinished, contributing to the company having to complete the work at the Michigan factory or at dealerships, the people said.

Ford is unaware of any recent issues in which employees are intimidating one another, the spokeswoman said. The automaker is waiting its turn to negotiate a new labor contract with the United Auto Workers union, which has been on strike against General Motors Co. since mid-September.

Ford spent a combined US$1 billion upgrading its 95-year-old assembly plant and 63-year-old stamping factory in Chicago, outfitting them with advanced manufacturing technology to produce the Explorer, Aviator and Police Interceptor Utility.

Those investments included US$40 million to upgrade lighting and add security at the plants, where some employees have experienced sexual and racial harassment. In August 2017, the company agreed to pay as much as US$10.1 million to settle claims following an investigation by the Equal Employment Opportunity Commission. Ford faced similar charges at the Chicago factories in 1999 that led to a US$17.5-million settlement.

When Hackett’s executive team discusses quarterly results with analysts this week, they’re likely to have to address how much further the plant has to go to overcome its troubled past.

“You can’t afford to have these kinds of issues in this market environment. It shouldn’t have become the problem that it is,” LMC’s Schuster said. “They have some explaining to do.”